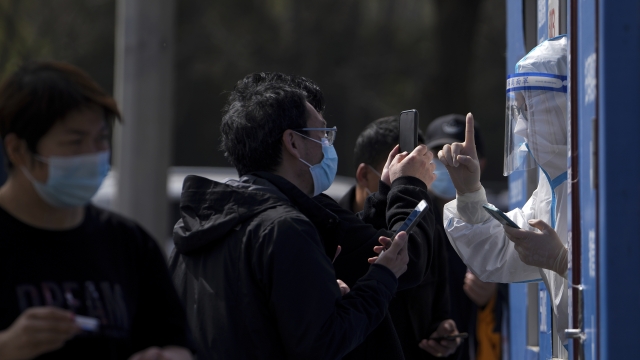 The World Health Organization reports a global drop in COVID-19 cases for the second week in a row, but you wouldn't know it looking at Shanghai. China's largest city remains in lockdown — a move that was supposed to be lifted Tuesday.

Dr. Eric Feigl-Ding is the chief of the COVID task force at the World Health Network.

It's personal to epidemiologist Feigl-Ding.

"I'm really worried about Shanghai. Shanghai is my original birth city. And it's where a lot of my relatives are," he continued. "Some of my relatives have been locked down for almost a month."

The city looks deserted. It set another daily case record Tuesday, with more than 17,000 cases. All but 311 were asymptomatic. The director of Shanghai's working group on epidemic control called the situation extremely grim.

"China is sending in so many more medics, doctors and nurses than they originally planned," Feigl-Ding said. "They're doing another round of testing that wasn't planned and they're now extending the lockdown to an undetermined date. That is definitely not planned and that is giving everyone anxiety because now instead of having a precise ending which you can look forward to they don't know what is going on anymore."

China has a zero-COVID approach, meaning anyone who tests positive is held in a designated location for observation.

News that parents were being separated from infected children sparked outrage, with the city now allowing some parents to stay with kids with special needs.

The parents must still wear masks, eat separately from their children and follow other strict regulations.

"If you want to go for zero or low COVID, you don't need lockdown. They're not the same. Zero-COVID and lockdown are not the same. You can have multiple layers of mitigations," Feigl-Ding said.

And while Feigl-Ding thinks China's approach is too aggressive, he thinks other places need to be more prepared for a wave of the highly contagious  BA.2 variant.