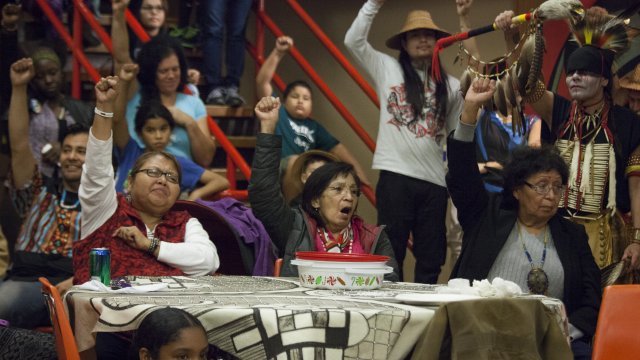 SMS
Native Women In Seattle Reported A High Rate Of Sexual Violence
By Cat Sandoval
By Cat Sandoval
August 31, 2018
A survey of 148 American Indian women in Seattle found that most of them had been raped or coerced into sex.
SHOW TRANSCRIPT

In a Seattle survey, 94 percent of American Indian and/or Alaska Native women reported being raped or sexually coerced. That's according to a 2010 report by the Urban Indian Health Institute and the CDC.

One hundred forty-eight Native women in urban areas participated in the survey, half of whom were homeless. Eighty-two percent said the incident happened before they were 18 years old. And of the cases reported to police, only 8 percent resulted in a conviction.

"When I saw the results of the survey, it's almost like my heart had stopped. I couldn't believe the information that was contained within it," said Abigail Echo-Hawk, chief research officer at Seattle Indian Health Board.

It took eight years for the results of the survey to be released. Echo-Hawk found the documents in 2016 and worked toward its publication. She said the results were never released because institute leaders believed the information would lead to negative portrayals of the community. She said movements like #MeToo help changed that conversation.

"I think what this data tells us is that Native communities need to be the ones leading the way to work with our own community," Echo-Hawk said.

Echo-Hawk, who is a sexual assault survivor herself, hopes the information can pave the way for better policies and funding. She is currently working on similar surveys in other cities.