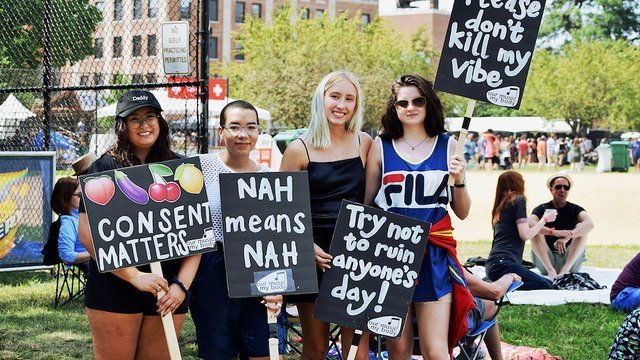 Newsy met with activists at a music festival's "consent booth" to find out why misconduct is so rampant and how it can best be stamped out.

From Coachella and Lollapalooza to smaller neighborhood fests across the country, millions of Americans have the time of their lives at music festivals every year. But many festival-goers are finding it difficult to avoid one serious societal issue: sexual harassment. Activist Maggie Arthur and her consent booth are there to remind festival-goers that, like in real life, it's everyone's responsibility to intervene.

"You can try to take the heat off the person who's been harmed by like, maybe a distraction. Or, if nothing else, you can be the one who steps away and ask security or a festival staff to step in," Arthur said.

"Or at the very, very least, checking in with the person who was harmed and making sure that they're OK. It doesn't matter if they've been drinking or what they're wearing or whatever. Just say, 'That really sucks, and I want you to know that it's not your fault.' If everyone knew that, I would feel so, so good about the work that I'm doing," she added.

Arthur's organization, Our Music My Body, surveyed more than 500 music fans last winter. Of all the female responders, 92 percent said they had experienced some sort of harassment at a music event. The most common forms were groping and catcalling.

"What we heard from the survey, and also just from talking to people anecdotally: Often when they go to security looking for help, either security doesn't believe them outright, or they just say, like, 'I don't know what you want me to do about it,'" Arthur said.

"Music festivals have to have emergency policies around weather emergencies, active shooters, any other kind of violence, but they don't have anything around sexual violence. And so the ultimate goal for Our Music My Body is to work with as many festivals as we can to ensure that they have some kind of policy and procedure in place."

Our Music My Body is helping festivals such as Lollapalooza, Riot Fest and Pitchfork enact and enforce strict anti-harassment policies. But many festival-goers say the policies don't always work in practice.

An Oregon music festival sued the companies behind Coachella and claimed the California music event prevents musicians from performing elsewhere.

"If I was groped I would have I would go to a staffer, but that staffer might not be a permanent staffer, they might be a temporary staffer. And if they're a temporary staffer, their job is then to take me to a permanent staffer," explained freelance journalist Isabel Dieppa. "It just puts all the onus on the victim. And by the time I find someone, the dude who did it is probably gone."

Dieppa is a contributor to Marie Claire. After coming across Our Music My Body signs at Pitchfork last year, she decided to attend all the other big summer festivals in Chicago to observe how their anti-harassment policies played out. Her conclusion, which she detailed in this Marie Claire piece, aligned with the findings from the Our Music My Body survey.

"When I spoke to festival planners up in Denmark, they said something really beautiful, which is, 'When you create a mini city, the problems of society seep in.' And the truth is that sexual harassment and sexual violence is a problem in our society. And in order for festivals to change, they have to change the culture," she said.

One way for festivals to do that, Dieppa argues, is to book more female performers and to give them better set times. Some of her other suggestions include banning artists who have been called out for harassment and using the festival stage to raise awareness about the issue.

"If we all go in and we we actually take a microscope to this, then it'll actually start to shift the culture, yeah. And and it'll make places that that have large amounts of people safer for women, and ultimately that's what the whole #MeToo movement is about. That's what we want. We want to be safe," Dieppa said.