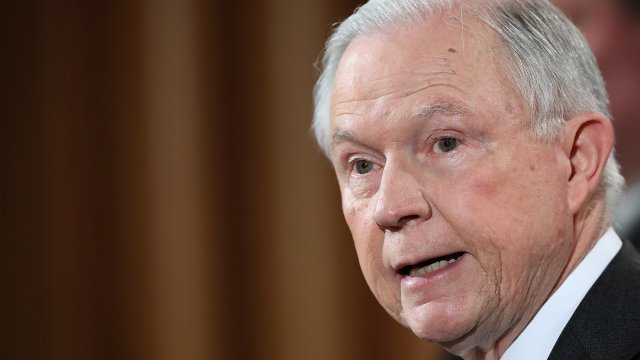 Attorney General Jeff Sessions says the section of the 1964 Civil Rights Act banning sex discrimination in the workplace does not apply to transgender people.

Holder said Title VII of the Civil Rights Act extends protections to anyone who's faced "discrimination based on gender identity, including transgender status."

But Sessions says the Obama administration's interpretation was not what Congress intended when it passed the law, noting the act doesn't mention gender identity. A Justice Department spokesman said in a statement, "The Department of Justice cannot expand the law beyond what Congress has provided."

Multiple federal courts adhered to the Obama administration's guidance, ruling in favor of transgender people who said they'd been discriminated against in the workplace.

An attorney for LGBTQ group Lambda Legal told Buzzfeed, "This memo is not actually a reflection of the law as it is — it's a reflection of what the DOJ wishes the law were."

The reversal is in line with others issued by the Trump administration.

Sessions said the new rule will apply to "all pending and future matters." But he might be headed for a legal fight.

In response to Sessions' memo, the executive director of the National Center for Transgender Equality said, "Courts have repeatedly ruled that transgender people are protected by sex discrimination laws in employment, education, housing and healthcare. We'll see him in court."