Sexual Assault Reports In Military On The Rise in 2014 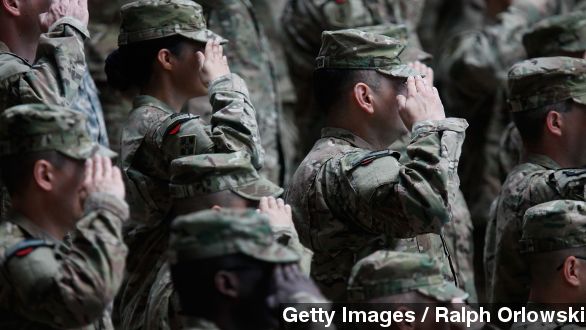 SMS
Sexual Assault Reports In Military On The Rise in 2014
By Jay Strubberg
By Jay Strubberg
December 5, 2014
A new Pentagon survey says reports of sexual assault in the U.S. armed forces have jumped eight percent over the past year.
SHOW TRANSCRIPT

President Obama said, "Not only is it a crime, not only is it shameful and disgraceful but it is also going to make and has made our military less effective than it can be."

That was President Obama last May speaking on the issue of sexual assault within the U.S. armed forces. It's a problem the administration obviously wants eliminated, but, according to a new Pentagon report, there's still a lot of work to be done.

The lengthy 1,136-page anonymous survey by the RAND Corporation says there were nearly 6,000 sexual assaults reported in 2014. That's up eight percent over last year and a huge 66 percent jump from 2012. (Video via U.S. Army)

And while the number of reports of sexual assaults keeps increasing year after year, military officials say the results are two-fold: its problematic but also indicates more and more troops are coming forward.

Additionally, the report says 62 percent of female sexual assault victims in 2012 faced retaliation for speaking up about it.

It's a figure that some in Congress, like New York Democratic Sen. Kirsten Gillibrand, have called a "screaming red flag."

New York Democratic Sen. Kirsten Gillibrand told reporters, "The DOD needs to recognize that they've promised zero tolerance for sexual assault for twenty five years, and today's report proves that what we have today is not zero tolerance. What we have is zero accountability."

Gillibrand, whose been on the front lines battling sexual assault in the military, fell a few votes short on aggressive military sexual assault reform last year. (Video via Al Jazeera)

Missouri Sen. Claire McCaskill said, "We still have too many sexual assaults."

But, there have been some political gains. Missouri Sen. Claire McCaskill later passed a more toned down version of her reforms, with a provision allowing the military to prosecute its own sexual assault cases. (Video via C-SPAN)

In any case, Gillibrand reportedly still wants to give her more aggressive reforms another shot, possibly waiting for some new faces to arrive in Congress to try and push legislation through.