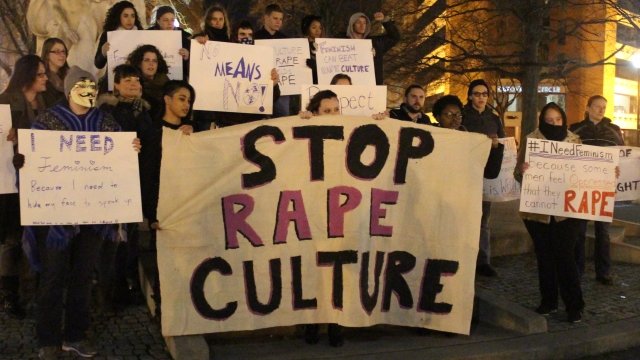 SMS
Sexual Assault Activists Notice Something Missing On White House Site
By Casey Mendoza
By Casey Mendoza
September 1, 2017
The call to action page for sexual assault prevention was removed soon after the inauguration, but many critics noticed it only recently.
SHOW TRANSCRIPT

The White House website changed a lot right after the inauguration. But removing a report on sexual assault prevention has just recently sparked backlash among advocates.

Also, government-sponsored resources and research on campus sexual assault is still available on the websites for the Department of Justice and Bureau of Journal Statistics.

The co-founder of Know Your IX saw it was removed Wednesday, and news outlets were quick to jump on the story.

HuffPost reported the page was "quietly" and "recently removed," but according to the Internet Archive, it was removed soon after President Donald Trump's inauguration — a move that's normal for any new administration.

But the page's removal isn't the only thing that concerns Title IX advocates.

DeVos also received backlash for including organizations like SAVE in one of her meetings. The Southern Poverty Law Center says the group works to roll back services for domestic abuse survivors and supports those who say they've been falsely accused. The group's involvement has led some advocates, as well as survivors of sexual assault, to doubt Devos' commitment to Title IX.

In July, a letter signed by 20 attorneys general was sent to DeVos urging her to retain protections for sexual assault survivors.

According to The Chronicle of Higher Education, over 83 percent of Title IX cases involving colleges are currently open.