Sex Can Wait If You've Been Near Zika, CDC Warns 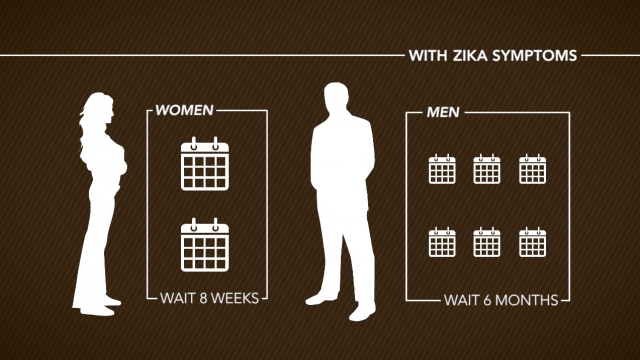 Americans who might have been exposed to Zika and are trying to get pregnant should know these new government guidelines.

The Centers for Disease Control and Prevention have issued new pregnancy guidelines for those exposed to the Zika virus.

For those who've traveled to affected areas but aren't showing symptoms, wait eight weeks before trying to get pregnant.

For others who are diagnosed with or showing symptoms of Zika, the CDC recommends women wait eight weeks before conceiving and men wait six months before having unprotected sex.

The CDC writes: "In making these recommendations, we considered the longest known risk period for these categories. We then allowed for three times the known period of time."

Meanwhile, the CDC cautions that the link between Zika and birth defects, like microcephaly, still isn't fully understood.

"I think the evidence of a link between Zika and a spectrum of birth outcomes is becoming stronger and stronger.  At this point, we're not using causal language, but the evidence is mounting," said the CDC's Denise Jamieson.

The CDC says symptoms appear in only about 20 percent of Zika cases. They typically include rash, fever and joint pain.

CDC officials updated their count Friday to 273 known cases in the U.S. across 35 states.

This video includes clips from KCNC and images from Getty Images and Edward Boatman / CC BY 3.0.