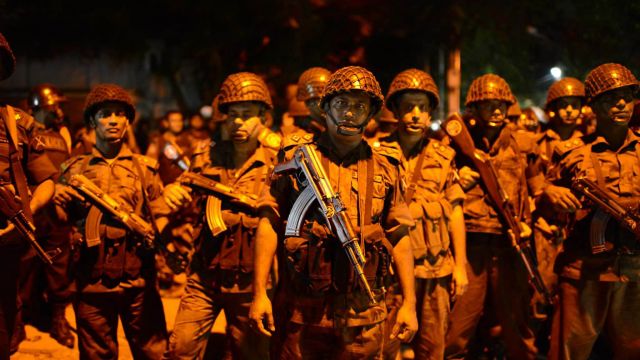 SMS
Several Killed, Hostages Taken During Attack In Bangladesh
By Matt Picht
By Matt Picht
July 1, 2016
The attackers stormed a popular cafe in the capital city of Dhaka, engaging in a firefight with police.
SHOW TRANSCRIPT

Around eight to 10 armed attackers stormed the Holey Artisan restaurant, located in a upscale neighborhood that houses many of the city's diplomatic buildings. CNN reports as many as 20 people are being held hostage.

The attackers have fired on police and detonated explosives; at least two police officers have been killed and 30 more injured. The terrorist group ISIS has claimed credit for the attack, according to the SITE Intelligence Group.

The U.S. Department of State said it had accounted for all diplomatic personnel in the country but hadn't confirmed whether any private U.S. citizens were caught up in the attack.

This video includes an image from Getty Images and clips from ATN News and Jamuna TV.