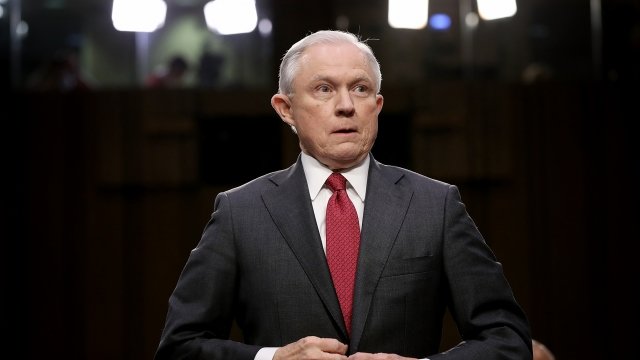 Attorney General Jeff Sessions wouldn't say Wednesday whether he's recused himself from the investigation into Michael Cohen. Cohen, of course, is President Donald Trump's personal lawyer who's under criminal investigation for his business dealings, including his actions during the 2016 campaign.

Last year, Sessions recused himself from the investigation into Russian interference in the 2016 election. The head of that probe, Robert Mueller, tipped off investigators in New York about Cohen.

"I am honoring the recusal in every case, in every matter that comes before the Department of Justice. I committed to that in my confirmation hearing, and I have honored that and will continue to honor that," Sessions said during a hearing on Capitol Hill in which he was slated to talk about the DOJ's budget.

"It is the policy of the Department of Justice that those who've recused themselves not state the details of it," Sessions said. "I feel like, following the rules of the department, which I'm trying to teach all of our people to do, that I should not answer that question. It would be inappropriate for me to do so."

On Tuesday, Bloomberg cited a person as saying the attorney general had decided against recusing himself in the Cohen case. The Department of Justice responded, saying essentially what Sessions said in that Wednesday hearing.