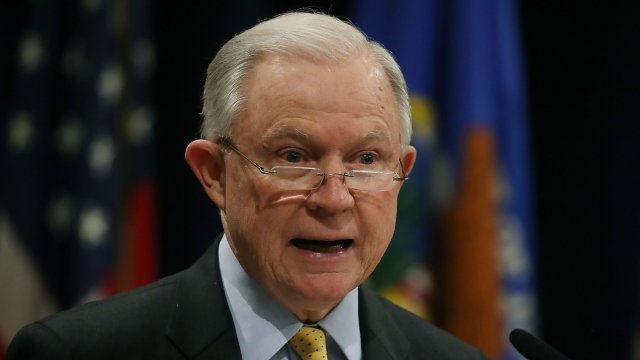 SMS
Sessions Suggests Connection Between Marijuana And Opioid Addiction
By Briana Koeneman
By Briana Koeneman
February 7, 2018
Jeff Sessions said his goal is to see a decline in opioid prescriptions, adding, "We think a lot of this is starting with marijuana and other drugs."
SHOW TRANSCRIPT

Attorney General Jeff Sessions says he believes there's a connection between marijuana use and opioid addiction.

While speaking at a Heritage Foundation event Tuesday, Sessions said his goal is to see an even bigger decline in opioid prescriptions this year.

He added: "We think a lot of this is starting with marijuana and other drugs."

Now, many experts say there isn't enough evidence to prove a direct correlation between recreational marijuana use and opioid addiction.

But the Trump administration has previously tried to link recreational marijuana use and opioid addiction.

"I think that when you see something like the opioid addiction crisis blossoming in so many states around this country, the last thing that we should be doing is encouraging people. There's still a federal law that we need to abide by when it comes to recreational use marijuana and other drugs of that nature," former White House press secretary Sean Spicer said.