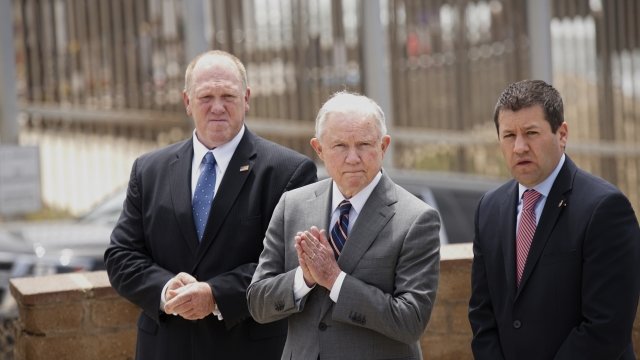 The first step back was President Donald Trump's executive order addressing family separations at the border. And now in an interview with the Christian Broadcasting Network, Attorney General Jeff Sessions says the administration never wanted to separate parents and children in the first place.

"We never really intended to do that. What we intended to do was to make sure that adults who bring children into the country are charged with the crime they've committed, instead of giving that special group of adults immunity from prosecution," Sessions told CBN.

But that's not what the AG said in early May, before family separations became a national crisis.

"If you're smuggling a child, then we are going to prosecute you, and that child will be separated from you, probably, as required by law. If you don't want your child to be separated, then don't bring them across the border illegally," Sessions said in Arizona.

And he said in California: "If you are smuggling a child, then we will prosecute you, and that child may be separated from you as required by law."

And the Trump administration started considering separating parents and children over a year ago.

"Are Department of Homeland Security personnel going to separate the children from their moms and dads?" Wolf Blitzer asked.

"We have tremendous experience in dealing with unaccompanied minors. We turn them over to HHS, and they do a very, very good job of putting them in, kind of, foster care or linking them up with parents or family members in the United States. Yes, I am considering it in order to deter more movement along this terribly dangerous network. I am considering exactly that," then-Homeland Security Secretary John Kelly said.