Sessions Outlines When To Use The Death Penalty For Drug Crimes 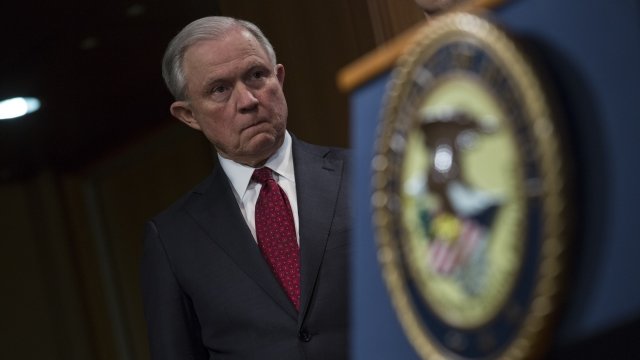 SMS
Sessions Outlines When To Use The Death Penalty For Drug Crimes
By Lindsey Pulse
By Lindsey Pulse
March 21, 2018
Attorney General Jeff Sessions issued a memo to U.S. attorneys Wednesday outlining cases where the death penalty could be pursued.
SHOW TRANSCRIPT

Sessions pointed out the statutes that can be used to pursue capital punishment. Those include certain racketeering activities, gun deaths during drug trafficking crimes, dealing in "extremely large quantities of drugs," and other statutes.

Sessions also proposed other measures to fight the crisis — like designating an opioid coordinator in every U.S. district and further holding opioid manufacturers and distributors accountable for breaking the law.

The memo comes after President Donald Trump unveiled a plan Monday to combat the opioid epidemic, which includes a call for the death penalty for some drug dealers.