Jeff Sessions Faces Down Another Wave Of Pressure From Trump 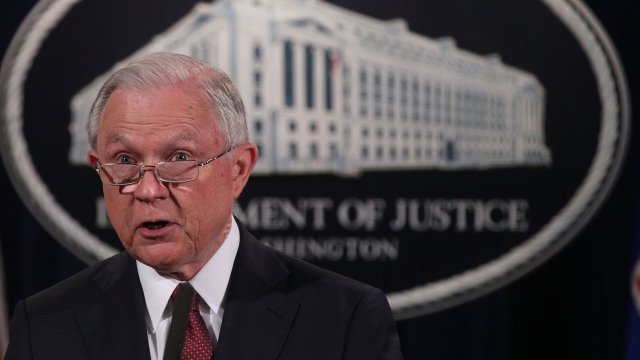 Before he was the Attorney General, Jeff Sessions used to be one of President Donald Trump's biggest boosters in Congress.

During a campaign rally, Trump said of Sessions, "He's so spot-on, he's so highly respected. Has anyone ever heard of Senator Jeff Sessions?"

Trump and Sessions have been feuding off and on ever since last year, when Sessions decided to recuse himself from the DOJ probe into Russian interference in the 2016 election. Sessions faced pressure to step away from the probe after questions arose about his role in the Trump campaign.

Sessions told reporters at the time, "In the end, I have followed the right procedure just as I promised the committee I would. Just as I believe any good attorney general would do."

Since then, the investigation helmed by former FBI chief Robert Mueller has ensnared several high-profile Trump campaign operatives, most recently former Trump campaign manager Paul Manafort. And Trump's frustration with the probe has grown: he's started publicly chastising Sessions on Twitter for not intervening to protect him or redirect the probe towards other targets.

Fundamentally, Sessions and Trump seem to have different views of how the Justice Department should be run. Sessions says he wants to keep the Department free of improper political bias, while Trump has suggested the DOJ should investigate his political rivals instead of his allies.

Some of Trump's supporters in Congress are now talking about the possibility that Sessions might be replaced soon.

Sen. Lindsey Graham told reporters, "The idea of having a new Attorney General in the President's first term is something I think is very likely."

But Sessions has weathered pressure from the president to quit in the past. On Thursday, Sessions said that the DOJ "will not be improperly influenced by political considerations" as long as he is at the helm.