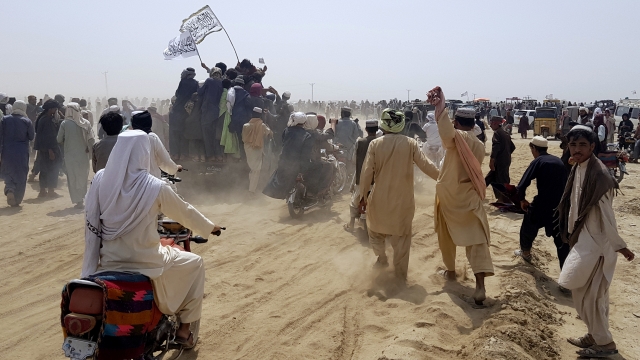 Today U.S. service members who fought in Afghanistan, like Maj. Thomas Schueman, are fighting another battle … trying to get their Afghan interpreters to safe ground.

"There was a time where I had multiple casualties and we were still under fire from the enemy. And Zak ends up picking up a rifle from one of my Marines who's missing his legs and providing security and cover fire. I mean, that's the type of kind of brotherhood. And that's kind of how close we became," Schueman says.

Schueman started the visa process to bring his interpreter, Zak, to the U.S. in 2016. But that Special Immigrant Visa application has been frozen -- the contracting company Zak worked for unresponsive to dozens of requests to confirm his employment. And now, with the U.S. troop withdrawal, the days are more dangerous.

"The Taliban threaten me. They are watching me," Zak tells Newsy.

He also says Taliban spies in the government obtained his contact information and now he gets called regularly with threats. And for security reasons we can't disclose his full name or where he, his wife, and four children are located.

But this saga has been playing out for more than 12,000 military personnel, veterans, and interpreters seen here, on this a private Facebook page they use... to air grievances and get advice.

Current and former service members are critical to getting these visas, providing guidance and letters of recommendation. But one veteran tells Newsy the process was so convoluted, so desperate and grueling that what proved most effective... was going to members Congress and to the media. That’s why some doubt President Biden’s assurances:

"There is a home for you in the United States if you so choose, and we will stand with you just as you stood with us.”

Veteran Michael McCarthy saw an Afghan he worked with get denied.

"A great many have mysteriously not had their applications approved," McCarthy says.

In the midst of his frustration, he is turning to faith:

"I personally put my hopes in the hands of God at this point."

"If we are perceived as not keeping our promises and not helping those individuals who worked with us, then it's going to be that much harder the next time we're in a foreign country and we need help from people on the ground," says Annie Kleiman, a reservist in the U.S. Air Force.

About 18,000 interpreter and translator applications are pending. The Biden administration now saying officials have identified a group in the pipeline that will be allowed to relocate outside Afghanistan as they go through the visa process. But the State Department declined to clarify whether that will help Afghans stuck in the early stages of the application, like Zak – who's in hiding, and doesn’t have money to flee.

For military personnel like Maj. Schueman, saving them is a duty...with no end in sight.

“I'll continue that fight until we get them here on American soil,” says Schueman.