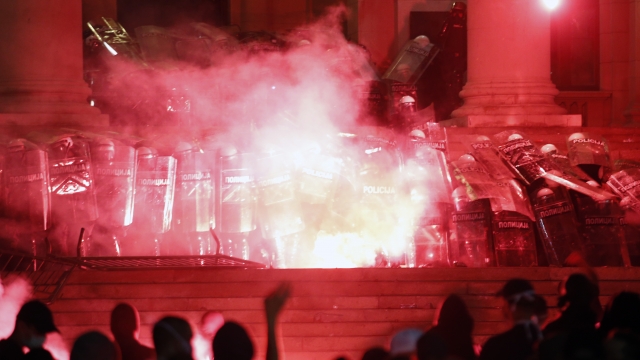 Serbian police detained 71 people in demonstrations against the country's coronavirus lockdown on Friday, the fourth consecutive night of demonstrations.

Thousands of demonstrators took to the streets. Some threw bottles, rocks and flares at police who were guarding Parliament. Police first tried pushing back protesters with shields, and then resorted to tear gas and physical attacks. Fourteen officers were injured.

Some journalists were also injured, mainly in attacks by right-wing demonstrators.

The demonstrations were sparked when the country's populist president announced a three-day COVID-19 lockdown on Tuesday. The gatherings mark the first major pushback against pandemic restrictions in Europe. What initially focused on outrage over the economic impacts of coronavirus lockdowns has evolved into concern over the state of democracy in Serbia. Protesters have demanded the president step down.

According to The New York Times, some analysts say they haven't witnessed such unrest in Serbia since the 1990s when civil strife led to armed conflict and the break-up of Yugoslavia.

Additional reporting by Dusan Stojanovic of the Associated Press.