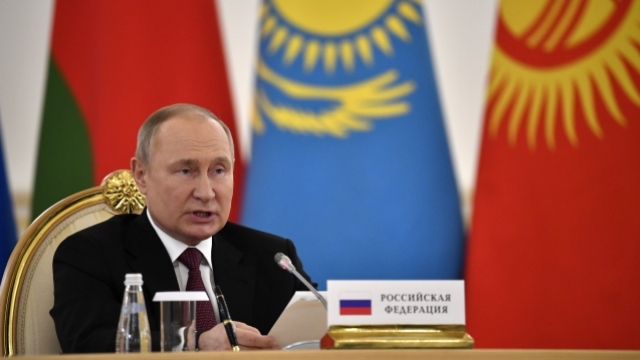 The Serbian president has refused to explicitly condemn Russia's invasion of Ukraine and Serbia has not joined Western sanctions against Moscow.

As the war in Ukraine rages, Serbia's president announced that he has secured an "extremely favorable" natural gas deal with Russia during a telephone conversation Sunday with Russian President Vladimir Putin.

Serbian President Aleksandar Vucic has refused to explicitly condemn Russia's invasion of Ukraine and Serbia has not joined Western sanctions against Moscow. Vucic, a former pro-Russian ultranationalist, claims that he wants to take Serbia into the European Union but has spent recent years cementing ties with Russia, a long-time ally.

Serbia is almost entirely dependent on Russian gas and its main energy companies are under Russian majority ownership.

"What I can tell you is that we have agreed on the main elements that are very favorable for Serbia," Vucic told reporters. "We agreed to sign a three-year contract, which is the first element of the contract that suits the Serbian side very well."

It is not clear how Serbia would receive the Russian gas if the EU decides to shut off the Russian supply that goes over its member countries. Russia has already cut off gas exports to EU members Finland,Poland and Bulgaria. The bloc as a whole has been hurriedly reducing its reliance on Russian energy since the Feb. 24 invasion of Ukraine.

Despite reports of the atrocities in Ukraine due to the invasion, Vucic and other Serbian leaders have been complaining of Western pressure to join sanctions against Russia. Serbian officials say the Balkan country must resist such pressure, even if it means abandoning the goal of joining the EU.

Under Vucic's 10-year autocratic rule and relentless pro-Kremlin propaganda, Serbia has been gradually sliding toward Russia. Polls suggest a majority in the country would rather join some sort of a union with Moscow than the EU.

"The agreement reached by President Vucic with President Putin is proof of how much Serbia's decision not to participate in anti-Russian hysteria is respected," said Interior Minister Aleksandar Vulin, who is known for his pro-Russian stance.

"The free leader, free people, make decisions that are good for Serbia and do not accept orders" from the West, Vulin said.