September's Democratic Debate May Feature Half As Many Candidates 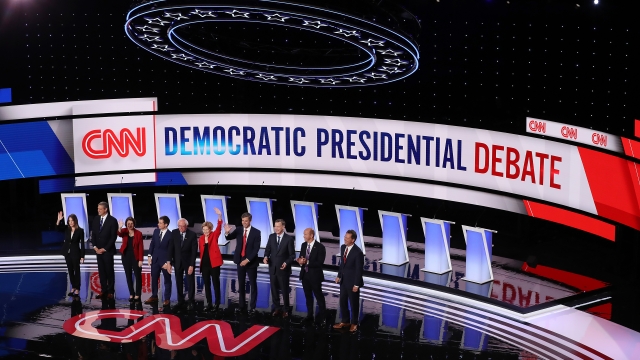 If 10 or fewer candidates pass the threshold, the debate will be held on one night instead of two.

We're about a month out from the next Democratic debates, and some presidential hopefuls are fighting to make it onto the stage.

To qualify, a candidate needs to hit at least 2 percent in four polls and have 130,000 unique donors, with at least 400 donors in 20 states.

Nine candidates have met the criteria so far, the most recent being Andrew Yang on Thursday. Joe Biden, Beto O'Rourke, Mayor Pete Buttigeig, and Sens. Amy Klobuchar, Kamala Harris, Bernie Sanders, Cory Booker, and Elizabeth Warren are also set to be on the stage. Some campaigns that haven't qualified told the Washington Post they are focusing instead on qualifying for the October debate, which has the same requirements.

The next debate is scheduled for September 12 and 13 in Houston. If there are 10 or fewer candidates slated by August 28, the debate will be held on one night instead of two. At this point, 10 to 12 are expected to qualify.

The candidate closest to crossing the threshold next is Rep. Tulsi Gabbard, who has met the donor requirement but needs to qualify in three more polls.