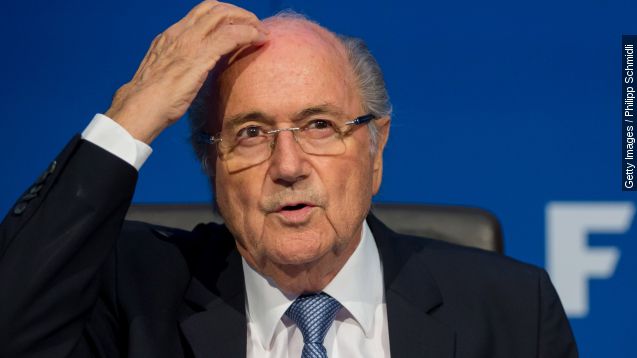 FIFA President Sepp Blatter is being sidelined for up to three months. Reports Thursday say Blatter, along with several other top soccer officials, have been provisionally suspended.

FIFA released a statement saying, in part, "The grounds for these decisions are the investigations that are being carried out by the investigatory chamber of the Ethics Committee."

Blatter is under investigation by Swiss authorities and could still face criminal charges for an alleged "disloyal payment" he made to Platini, who is a FIFA presidential hopeful. (Video via BBC)

And, if criminal charges and a suspension weren't enough, Chung Mong-joon — head of South Korea's soccer association and, yes, another FIFA presidential candidate — said he plans to sue Blatter for embezzlement. Chung was also suspended from FIFA on Thursday for six years for wrongdoing surrounding South Korea's 2022 World Cup bid. (Video via Arirang)

Blatter, Platini and Chung have all denied allegations against them. Blatter told a German newspaper Tuesday he doesn't plan on resigning immediately but said he will continue to fight until he steps down — as planned — in February. (Video via France 24)