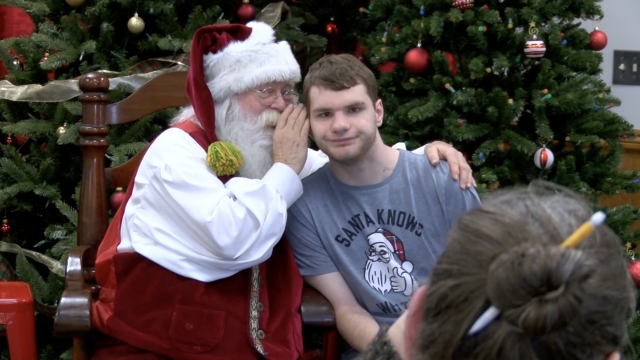 SMS
Sensory Santa Helps People With Special Needs Celebrate Holiday Season
By Isabella Basco
By Isabella Basco
November 26, 2021
People with autism might prefer less stimulation, but Santa Claus believes all of us share the same need to be seen, loved and cared for.

Sensory Santa gives people with autism the chance to interact with Santa in a calm setting: no loud noises, bright lights or large crowds.

For the first time, Sensory Santa was brought to Treynor, Iowa, at the Community Center. Karen Beck is the mother of 21-year-old River who has autism and ADHD.

"He's 21 years old now, but he still likes Santa, he likes going to places where he can see Santa Claus," Beck said. "I didn't have to be embarrassed about taking him to see Santa Claus, where it's all little kids."

As the saying goes, "a picture is worth a thousand words." This picture gives River the chance to properly ring in the Christmas spirit.

"It's just a comfortable thing, without a big crowd," Karen Beck said. "That made it fun for him, to not be nervous about ... to be with a bunch of other strangers."

People with autism might prefer less stimulation, but Santa Claus believes all of us share the same need to be seen, loved and cared for.

"People with autism are more the same than they are different than the general population, and it's just a little more difficult for them to get the pleasure out of life that we all deserve," Santa Claus said.

The Santa Claus participating in the event has been doing this for eight years and admits he's getting the most gifts out of it.

"If I have half the strength that these guys have I will be so lucky, and so that's why it's important to everybody. And it's just a lot of fun too," Santa said.

Wendy Andersen brought the event to Treynor to serve families in Iowa. Her hope is to foster an open environment where people can freely be themselves.

"Accepting truly the fact that your family is normal and that normal is what's relative to you. Love your kids, your family just as you always do and come from the place of acceptance and understanding throughout all the events of the holidays," Andersen said.

The event was sponsored by Dexter's Dream Foundation, a nonprofit organization that emphasizes inclusive life experiences.