Senators To Return To The Capitol Under New Coronavirus Guidelines 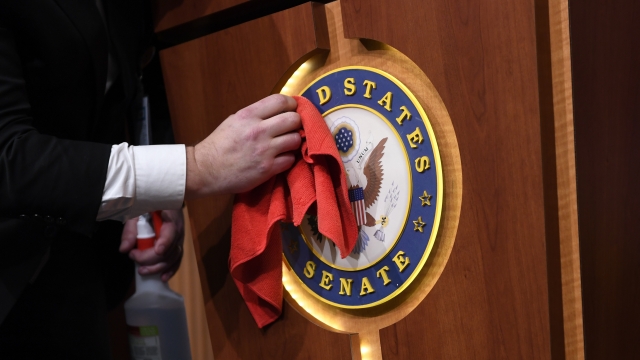 SMS
Senators To Return To The Capitol Under New Coronavirus Guidelines
By Gage Jackson
By Gage Jackson
May 2, 2020
Congress' physician issued guidelines encouraging senators to keep six feet of distance, to limit visitors and screen themselves before coming in.
SHOW TRANSCRIPT

Senators are planning to return to the Capitol on Monday under  new social distancing measures after a nearly month-long absence.

In a seven-page letter, Capitol physician Dr. Brian Monahan,  asked senators to maintain six feet of distance and limit staff and visitors in the office. He also recommended that all lawmakers wear masks and that everyone take their temperature every morning before coming into work.

A day earlier, Dr. Monahan had told GOP senators Thursday that there were only enough tests for those who were ill - not all senators and staff.

Senate Majority Leader Mitch McConnell has insisted that the Senate can operate safely if members and staff follow the guidelines but several Democrats voiced concerns over the return.

Sen. Patty Murray said, "I have not yet seen, personally … a safety plan to protect those people who have to come back to the Capitol in order for us to do anything. Nor a plan to make sure that we are not spreading the virus ourselves or to the employees."

Of the 100 senators, eight have been quarantined. One, Sen. Rand Paul, tested positive for the virus. He says he has recovered.