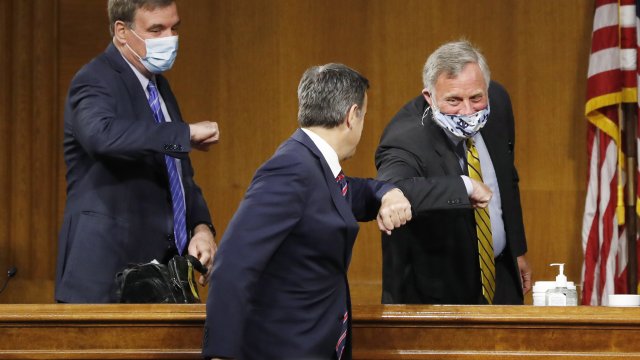 The Senate Intelligence Committee held Congressman John Ratcliffe's confirmation hearing after being nominated a second time. His first was pulled.

The Senate is back in session, kicking off its return with the confirmation hearing of Texas Congressman John Ratcliffe to become the Director of National Intelligence.

Ratcliffe, a former lawyer, mayor and U.S. attorney, is probably best known for his unwavering support for President Trump during both special counsel Robert Mueller's investigation and the impeachment proceedings.

He was previously critical of the whistleblower at the center of the impeachment investigation, but seemed to change his tune under oath Tuesday before the committee which created whistleblower protections.

Members of the Senate Intelligence Committee joined on a rotating basis throughout the morning to question Ratcliffe, who would be in charge of 17 intelligence agencies. They were asked to watch from their office when not questioning to keep with social distancing guidelines.

Ratcliffe was pressed on Russia's interference in the 2016 presidential election, on China and on North Korea.

The recurring theme was whether or not he could be unbiased in a notoriously non-partisan position. Sen. Marco Rubio (R-Fla.) says Ratcliffe will.

"The question is not whether you've been a partisan in your previous job, the question is whether you'll be a partisan in this job, and I believe he will be. He will be in a very different role than in Congress. When you're the Director of National Intelligence there's only one team and that's the United States of America," Rubio explained.

But when pressed about defending the intelligence community to President Trump, who has repeatedly said the agencies have "run amuck," Ratcliffe didn't give a straight answer.

Ratcliffe also faced questions about whether he believes the coronavirus was created in a Chinese lab. He said he did not believe that, but also couldn't confirm it originated in a wet market. Ratcliffe, a Texas Republican, sits on the House Intelligence Committee but said he hasn't received an intelligence briefing in some time.

This is the second time Ratcliffe is up for this job. President Trump nominated him in 2019, but ultimately rescinded the nomination after criticism that he inflated his resume.

"I don’t see what has changed since last summer when the President decided not to proceed with your nomination over concerns about your inexperience, partisanship, and past statements that seemed to embellish your record," ranking member Senator Mark Warner said. "This includes some particularly damaging remarks about whistleblowers, which has long been a bipartisan cause on this Committee.  I’ll speak plainly: I have the same doubts now as I did then."

All committee Democrats are expected to oppose Ratcliffe's confirmation, as nearly every Republican is expected to support it. Republican Senator Susan Collins, who finds herself in a tough re=election fight in Maine, is likely the swing vote.