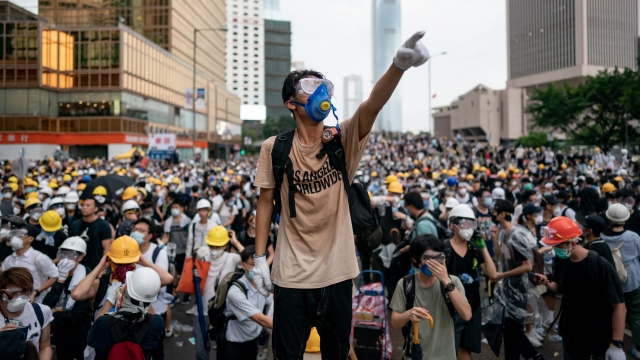 Senators on both sides of the aisle want Senate Majority Leader Mitch McConnell to bring the Hong Kong Human Rights and Democracy Act to the floor for a vote. The bill would require Washington to assess Hong Kong's status as a U.S. trading partner each year, as well as impose sanctions and other penalties against those who are undermining the city's autonomy.

The Senate Foreign Relations Committee passed the measure in September. But as of Wednesday, no vote in the full chamber has been scheduled. The House already approved its own version of the bill last month.

The protests in Hong Kong have been going on for more than five months. But there's been an uptick in violence this week. Protesters armed with bows and arrows and gasoline bombs have been squaring off against police at the Chinese University of Hong Kong.

This comes after police shot a protester in the torso Monday with a live round. Other demonstrators were caught on camera pouring flammable liquid on a man and setting him on fire.

China once again criticized U.S. lawmakers on Wednesday for trying to interfere. A spokesman for China's Foreign Ministry warned China would take countermeasures to "resolutely uphold its own sovereignty, security and development interests."