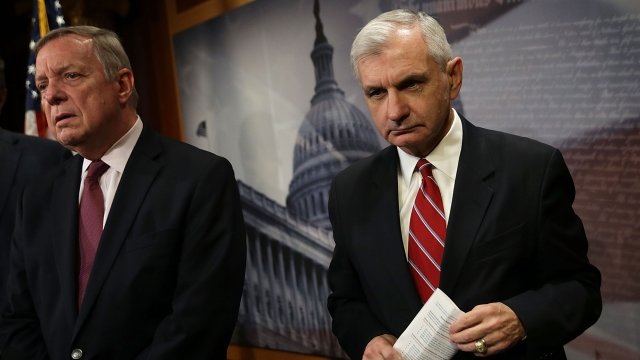 Two Democratic senators concluded the Pentagon "has no legal authority" to use military funding to build a wall along the U.S.-Mexico border.

Sens. Dick Durbin and Jack Reed made that point in a letter to Defense Secretary Jim Mattis. President Donald Trump and Mattis recently had an "initial" discussion about repurposing some defense funds to build Trump's proposed border wall despite Trump's promise that Mexico would fund the project.

They point out reprogramming requests "cannot create a new purpose for any funds, and all reprogrammings must be for unforeseen military requirements."

The massive spending bill Trump reluctantly signed lines out $1.6 billion for fencing and certain surveillance tools. But that falls pretty far short of Trump's $25 billion request for wall funding. He's reportedly had multiple conversations about using military funds to build a border wall and labeled the issue a matter of national security.