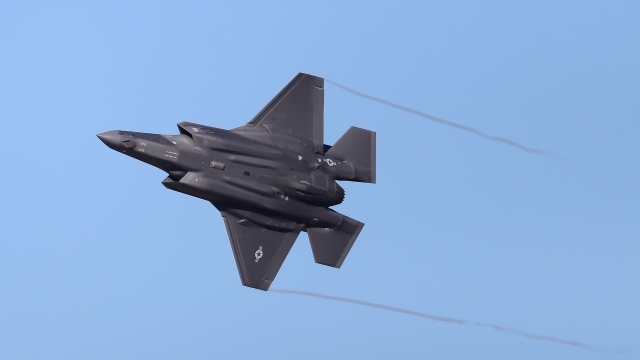 SMS
Senators Introduce Bill To Stop Transfer Of F-35 Jets To Turkey
By Ahmed Jawadi
By Ahmed Jawadi
March 28, 2019
​The bill seeks to withhold funding towards the transfer of F-35s to Turkey unless it abandons its deal to buy a Russian missile defense system.
SHOW TRANSCRIPT

A bipartisan group of senators have introduced a bill to prohibit the U.S. from delivering F-35 jets to Turkey until the country abandons its deal to buy a Russian missile defense system.

On Thursday, lawmakers introduced the bill which seeks to withhold any funding towards the transfer of F-35s to Turkey unless President Donald Trump "[certifies] to Congress that the Government of Turkey does not plan or intend to accept delivery of the S–400 air defense system."

Some U.S. officials are concerned if Turkey purchases the Russian-made S-400 missile system then Russia could gather technical information on the F-35s. One of the senators sponsoring the bill said in a statement, "Make no mistake – the Kremlin is an adversary of the United States and many of our NATO allies. The prospect of Russia having access to U.S. aircraft and technology in a NATO country, Turkey, is a serious national and global security risk."

Turkey is one of nine countries involved in the F-35's development, and the U.S. has agreed to sell the country 100 of its latest fifth-generation fighter jets. Only two of the aircrafts have been delivered so far, as Congress ordered a delay in future deliveries last year. Earlier this month, Turkish President Recep Tayyip Erdoğan said Turkey and Russia have already reached an agreement on the S-400 system, and that there was "no turning back."