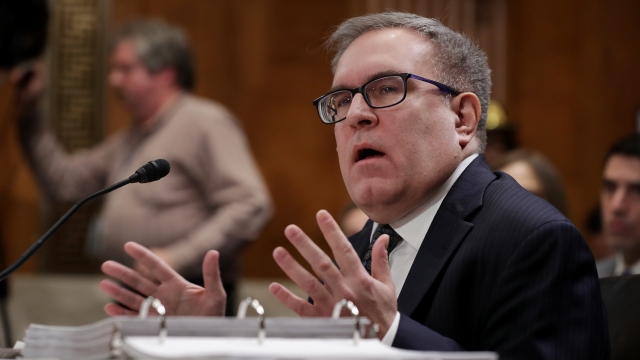 Lawmakers pointed out that Wheeler failed to mention climate change in his opening statement and questioned his position on the issue.

"The president has said that climate change is a hoax. Do you agree with him?" Sen. Bernie Sanders asked.

"I have not used the 'hoax' word myself," Wheeler responded. "I would not call it the greatest crisis. No, sir. I consider it a huge issue that has to be addressed globally."

Amid interruption from environmental rights protesters, Wheeler also addressed concerns about how the agency is faring during the partial government shutdown.

"I'm really looking forward to our furloughed employees coming back to work. We are still on the job on any emergency actions, as well as any court-ordered actions," Wheeler said.

Lawmakers also brought up a series of regulatory rollbacks under the Trump administration.

During his time as acting head, Wheeler, a former coal lobbyist, has proposed rolling back some pollution limits and protections for certain waterways as well as weakening car emissions standards.

Wheeler was tapped to temporarily lead the agency after the EPA's former head, Scott Pruitt, resigned amid multiple investigations into his spending and ethics.

Wheeler will likely be confirmed by the Republican-controlled Senate.