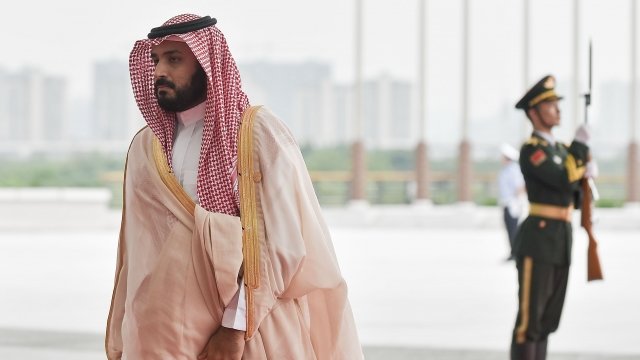 By Katie Cammarata
December 6, 2018
Senators introduced a bipartisan measure Wednesday that says the crown prince is accountable for the death of Khashoggi and the crisis in Yemen.
SHOW TRANSCRIPT

A bipartisan group of senators has introduced a resolution that holds Saudi Crown Prince Mohammed bin Salman accountable for the death of journalist Jamal Khashoggi.

It says the crown prince is accountable for contributing to the humanitarian crisis in Yemen, the blockade in Qatar, the jailing and torture of people who oppose him, the use of force to intimidate rivals, and the "abhorrent and unjustified killing" of Khashoggi.

The Washington Post columnist was killed at the Saudi consulate in Istanbul in October. He was a known critic of Mohammed bin Salman. Senators say Khashoggi came to the U.S. in a self-imposed exile because he was scared of being arrested by the crown prince in Saudi Arabia.

The bipartisan resolution also says the crown prince was in charge of the security forces when Khashoggi was killed.

The measure concluded that the Senate "has a high level of confidence that Mohammed bin Salman was complicit in the murder of Jamal Khashoggi." It urged the U.S. government and world leaders to hold those responsible for Khashoggi's death, including the crown prince, accountable.

Saudi Arabia has denied that the crown prince knew of Khashoggi's murder before it happened.

Since the lawmakers' resolution is what's called a "simple resolution," it's nonbinding. But if the Senate approves it, it would represent the chamber's official position on the topics it discusses. Simple resolutions don't require any action from the House.