Senators Back In DC Despite Some Members' Heightened COVID-19 Risk 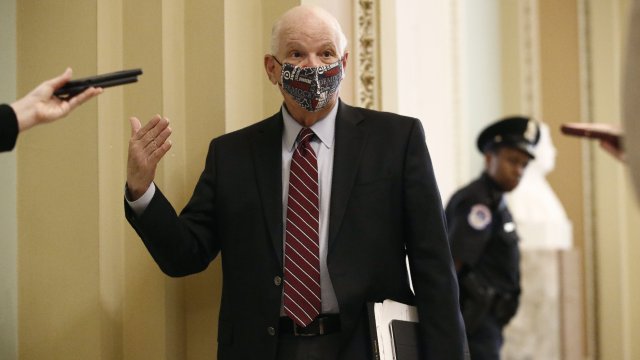 The Senate is expected to take up more than half a dozen nominations by President Trump.

Senators are heading back to Washington. On the docket this week, some COVID-related topics like examining testing and the impact on the airline industry. But for Majority Leader Mitch McConnell, there's one overarching topic he's looking to take up: nominations. Senators will hold five confirmation hearings, including for the director of national intelligence and multiple federal judges.

As Congress negotiates another coronavirus relief package, Sen. Marco Rubio, who serves as chairman of the Senate's Small Business Committee, says he'll be discussing options for a third round of the Payment Protection Program funding for businesses when he gets back to D.C.

All of this as members grapple with their return and opening up the country. Nearly half of U.S. senators are over the age of 65.

As the House remains at home, the Capitol physician released a seven-page list of guidelines Friday encouraging wearing masks, cleaning offices and social distancing; including saying minimal staff should be on the Hill. Both Sens. Sherrod Brown and Marco Rubio say they'll limit their office to one in-person staffer at a time. The Capitol physician told Senate leadership last week there was not enough testing for the 100 members, but both McConnell and House Speaker Nancy Pelosi issued a rare joint statement declining the president's offer to deploy rapid COVID-19 tests. They said in part, "Congress wants to keep directing resources to the front-line facilities where they can do the most good the most quickly." They say they'll wait to use "speedier technologies" until they are widely available.

There are plans to keep some normalcy on the Hill. Senate Republicans are reportedly asking to use the Senate gym and will conduct their weekly in-person lunch together, three to a table.

Speaker Pelosi says she's hoping to have the House return next week, but no definitive date has been given.