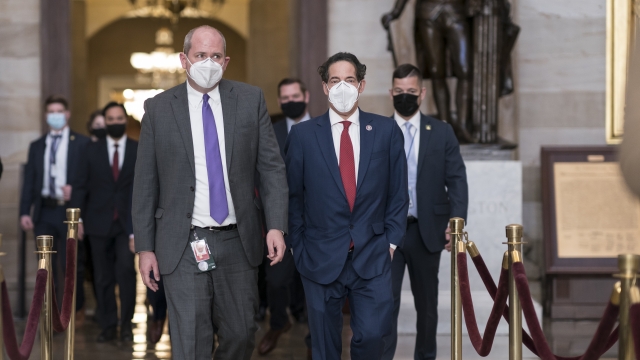 SMS
Senators Agree To Rules A Day Ahead Of Impeachment Trial
By Newsy Staff
By Newsy Staff
February 8, 2021
The trial kicks off in earnest on Tuesday.
SHOW TRANSCRIPT

CHANCE SEALES: The rules are set, the arguments are laid out, and on the eve of his second impeachment trial, lawyers for former President Donald Trump urge senators to dismiss the single charge of inciting an insurrection.

Trump still denies any responsibility for the deadly attack on the nation's Capitol, and at the same time as this, millions of Americans hope all the focus won't be drawn away from their desperate need for more financial relief at this very moment.

Joining me from Washington to talk about this is congressional reporter Alex Miller and Willie James Inman at the White House. Willie, if you can stand by for a moment. I know you have new details from the White House in getting more money to Americans, but Alex, let's start with you.

The impeachment. The trial kicks off in earnest on Tuesday. What details do we have so far?

ALEX MILLER: We got information late this afternoon from Senate Minority Leader Chuck Schumer. I just want to run you through the schedule. There's a lot of numbers. It's a little bit confusing how they structured it. Tomorrow, it is going to start. So Tuesday at 1 p.m., they are going to debate for four hours. They're going to present arguments about the constitutionality of the trial — so whether or not they even should be doing it. After that, they're going to take a vote. It'll almost assuredly pass because Vice President Harris could be the tie-breaker vote. And then after that, that's when the real trial is going to begin. First, each side is going to get 16 hours each to present their arguments, but the stipulations say it could only be over the course two of days and maximum eight hours each side per day. Basically, you're looking at Wednesday and Thursday for the main arguments. Then you're going to have four hours for senators to ask questions, two hours to debate witnesses and then four hours for closing arguments before they get into the entire process of the vote. I want to note for you, they have not decided whether or not if they're going to call witnesses. They've not told us that. There will be no trial starting late Friday afternoon and Saturday. It'll reconvene on Sunday. They haven't said if they're going to convene on Sunday or hold off until Monday.