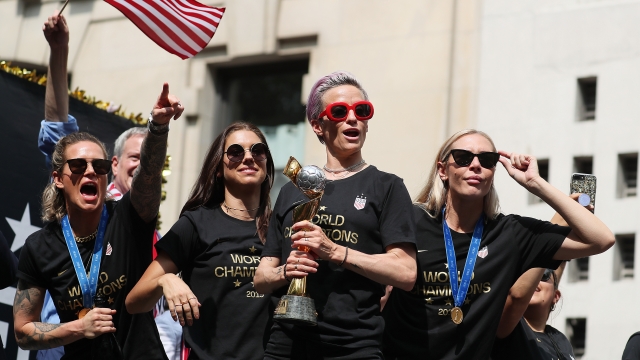 As thousand of people celebrated the U.S. Womens Soccer team's World Cup Championship win with a ticker-tape parade in New York City Wednesday, one lawmaker is pushing for pay equality in the sport.

Sen. Joe Manchin introduced a bill Tuesday that would prevent federal funding be used for the 2026 World Cup until the U.S. women's team is paid the same as the men's. The 2026 tournament will be co-hosted by the U.S., Mexico and Canada. The women's team has used their championship run to highlight their pay injustice.

"I think the men's side of sports just in general is seen as this exciting opportunity, business opportunity, that needs to be invested in. The women's is like, how cheap can we do this while, you know, sort of keeping them happy," said U.S. Women's National Team Co-Captain Megan Rapinoe.

Manchin said his proposal was drawn up after he received a letter from the head coach of the West Virginia University's women's soccer team concerning women athletes. In her letter, Nikki Izzo-Brown said that from her 24 years of coaching, she believes it's wrong for the U.S. women's team "to be paid and valued less for their work because of gender."

It's unclear how much money the government would spend on the 2026 World Cup. As CNN points out, the possible host cities being considered already have stadiums that are up to FIFA's standards. This sometimes isn't the case. In the 2014 World Cup in Brazil, multiple new stadiums had to be built specifically for that tournament. But even with stadiums that are ready to go, there still might need to be funding for security and transportation around the host cities.