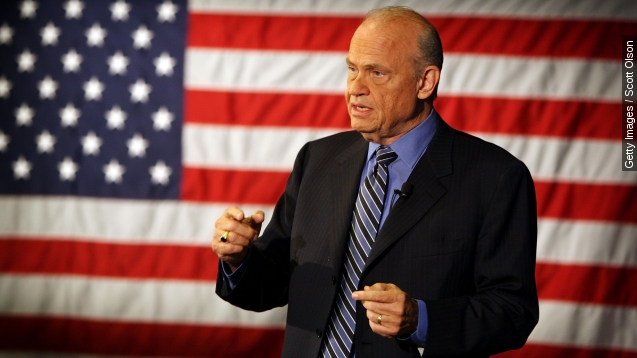 Thompson had a long career in government, but it's his film and TV roles that made him a familiar face nationwide.

Thompson was battling a recurrence of lymphoma, which he was first diagnosed with in 2005.

"Mr. Butterfield, were you aware of the installation of any listening devices in the Oval Offices of the president?" Thompson said.

"I was aware of listening devices, yes sir." Butterfield said.

Thompson was elected as a Republican to the Senate representing Tennessee in 1994. He filled the remaining two years of Vice President Al Gore's seat. He was re-elected in 1996, but chose not to run for re-election in 2002.

His political career continued years later as a Republican presidential candidate in 2007. His campaign gained little traction and he pulled out after only a few months.  (Video via C-SPAN)

But Thompson's work in TV and film is what many Americans remember him for.

"And Dick, I hope you get my meaning, 'cause by all that's holy, you better have your ass well covered." Thompson said.

More recently, he starred in NBC's "Law and Order" — in all these roles, channeling government power and stern charisma.