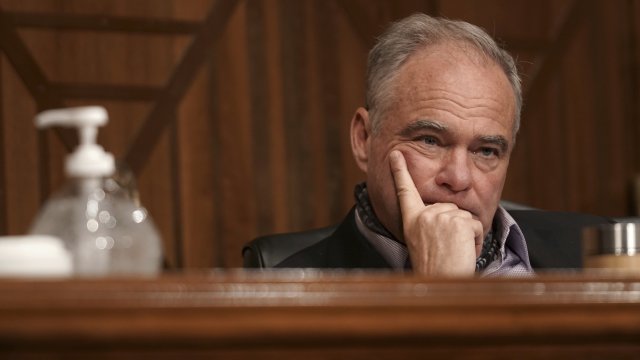 Democratic Sen. Tim Kaine says the administration sent only officials from the Department of Defense, and no one from the intelligence community, to the Senate Armed Services full committee briefing Wednesday morning.

The president has maintained he was never briefed on the matter before the story broke, though Sen. Ron Johnson of Wisconsin confirmed it was in his presidential daily briefing book back in February. Kaine, a Virginia senator who represents the largest population of the country's active duty military, told Newsy he's concerned why the president wouldn't have been told about the threat if so many other entities were.

"The White House pulled together an interagency meeting of the national security meeting in March, the White House briefed the British," Kaine said. "If the intel was strong enough to put it in the presidential daily briefing, that we needed to alert our allies, that there needed to be an interagency meeting, why wasn't Congress told? And why is the president saying he wasn't briefed and it's a fake story?"

The president spoke to Russian President Vladimir Putin multiple times in the days and weeks after those meetings. Kaine is hoping to find out whether the president brought the intelligence up.

But congressman Chris Stewart, a Republican member of the House Intelligence Committee who was briefed Monday evening, said he walked away with a different experience.

Not only did Stewart say he was briefed by the right intel officials, but he says it's still unknown whether the allegations are true. He says the reports that financial transactions occurring between a Russian-linked bank and a Taliban account had to do with bounties are premature, though he acknowledges Russia has supported American adversaries in Afghanistan.

"We've known it was a threat for a long time," Stewart said. "There was credible reporting that we wanted to follow that said Russia wanted to harm Americans in Afghanistan."

"We have the issue of what appears to be a breakdown in what informs decision-makers who make national security decisions," he said.

As lawmakers look to get to the bottom of this story, House Speaker Nancy Pelosi is requesting a rare full congressional briefing. Thus far, just over 40 members in all of Congress have been briefed. The Gang of Eight, which includes leadership in both the House and Senate and both intelligence committees, is set to be briefed Thursday.