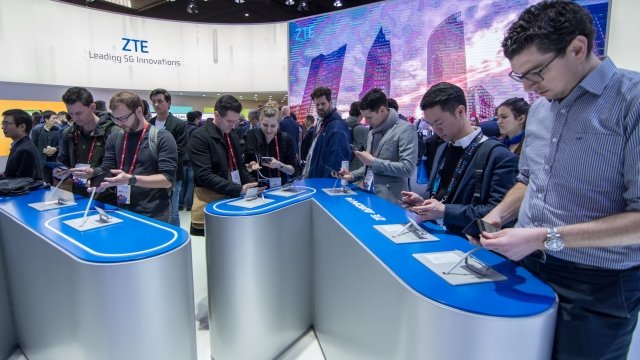 SMS
The Senate Is Trying To Block The Trump Administration's Deal With ZTE
By Katie Cammarata
By Katie Cammarata
June 12, 2018
A bipartisan group of lawmakers introduced an amendment that restores penalties against ZTE for violating sanctions on Iran and North Korea.
SHOW TRANSCRIPT

The Senate is in the process of blocking the Trump administration's deal with Chinese tech company ZTE that was announced last week. And a bipartisan group of lawmakers is trying to use the National Defense Authorization Act to do it.

On Monday, senators announced that the bill will include an amendment that restores penalties against ZTE for violating sanctions on Iran and North Korea. One of the amendment's co-sponsors said in a statement that the threat some Chinese tech companies pose to U.S. national security is "too great to ignore." He said this amendment "will help keep Americans' private information out of the hands" of the Chinese government.

If passed, the amendment would ban U.S. government agencies from buying or leasing services and equipment from Chinese tech firms ZTE and Huawei. It also bars government grants and loans to the companies.

On June 6, Commerce Secretary Wilbur Ross announced that ZTE and the U.S. Commerce Department had struck a deal. It would lift crippling U.S. sanctions on the company. In return, the Chinese tech firm would have to pay a $1 billion fine, $400 million in escrow in case of future violations, allow a U.S. compliance team to be embedded at the company and change its board of directors and executive team in 30 days.

Lawmakers from both sides of the aisle tweeted Monday supporting the amendment.

Senate Minority Leader Chuck Schumer tweeted: "The fact that a bipartisan group of senators came together this quickly is a testament to how bad the Trump administration's ZTE deal is and how we will not shy away from holding the president's feet to the fire when it comes to keeping his promise to be tough on China."

Senate Majority Leader Mitch McConnell tweeted that the defense authorization act is one of "our most important jobs here in Congress" and the Senate will "tackle it this week."

The bill will need approval from both the Senate and the House before moving to President Donald Trump's desk. From there, he still has the option to veto.

But according to NBC, one co-sponsor of the amendment said the president won't veto the bill because it "pertains [to] many other critical priorities."