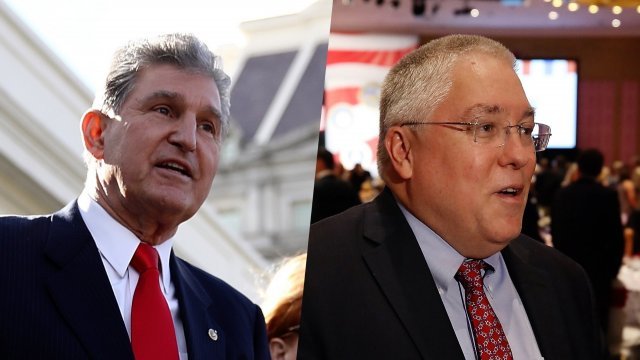 There are a lot of names to know before election day rolls around. Contributor David Hawkings is helping us sort it all out.

Republicans should be on offense in 10 Senate races in states Donald Trump carried in 2016 — half of them by double-digits.

By the numbers, Exhibit A for this is West Virginia. He got 68 percent of the vote there in 2016, his biggest majority of any state, and his approval rating remains a rock solid 60 percent now.

But things aren't working out for the GOP the way they planned in the Mountaineer state, and here’s why.

The Democrat running for re-election is Joe Manchin. He’s one of only a handful of senators these days who’s remained influential as a centrist legislator on Capitol Hill — and successful as a centrist politician back home, including a popular turn as governor a decade ago.

He comes from a tiny coal-mining town in West Virginia and has been known around the state since his college football playing days.

The Republican challenger is Patrick Morrisey, the state attorney general. He arrived in the state just a dozen years ago, having spent most of his life as a lobbyist, lawyer and aspiring politician in New Jersey.

Manchin has stayed closer to Trump than any other Democratic senator — and says he might even endorse his re-election.

He backed Neil Gorsuch, Trump's first Supreme Court pick. And he has been with the president almost all the time on immigration and environmental policy – especially important in coal country.

Instead, the issue that's defining the race is health care, where Manchin has split with both Trump and his Senate challenger.

Manchin voted for Obamacare and is talking non-stop about what might happen if it’s repealed: the potential loss of coverage for people with pre-existing conditions — almost one in three West Virginians — and cutbacks to Medicaid, which has a higher share of usage than in any other state.

Morrisey put the issue on the front burner himself, joining a group of fellow attorneys general in suing to get the Affordable Care Act declared unconstitutional.

Manchin voted against the Trump tax cut, because it effectively did away with the mandate that everyone have medical coverage. Morrisey thinks the tax cut should even be expanded.

And Manchin has been a leader of efforts to pass modest gun control measures, like expanding background checks and limiting the size of ammunition clips.

Morrisey disagrees with all that and has earned the endorsement of the National Rifle Association — an especially big deal in a state where the Second Amendment is almost part of the religion.

Manchin had one of the most memorable TV ads of 2010, underscoring how he's a gun guy and a coal guy by shooting a hole in a bill to combat climate. This time, his gun is aimed at Morrisey’s health care lawsuit.

West Virginia’s cultural and economic conservatism, and it’s love of Trump, give the Republicans every reason to hope they can take this seat.

But their candidate hasn't closed the deal yet, and all the while Manchin is reminding voters he's linked with the days when the state's power players were Democrats who wanted to cut deals with presidents of both parties.