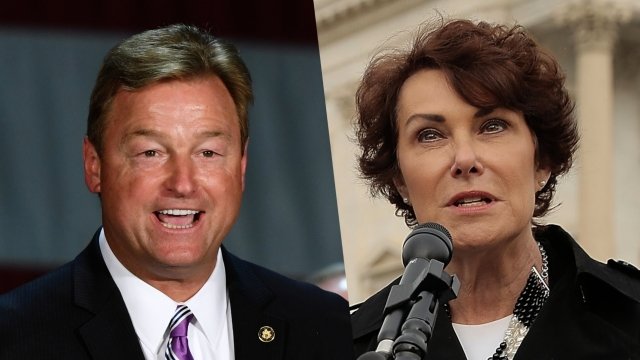 SMS
Senate Showdown: Meet The Players From Nevada
By Newsy Staff
By Newsy Staff
October 11, 2018
Health care is a major issue in Nevada, but Dean Heller and Jacky Rosen have different ideas on how to approach it.
SHOW TRANSCRIPT

Republicans remain favored to hold on to Senate control because they're challenging no fewer than 10 Democratic senators in states that went for President Donald Trump in 2016.

By contrast, there's just one Republican running for re-election in a state that Democrat Hillary Clinton carried.

He's Dean Heller, and his bid for another term in Nevada — against Democratic Congresswoman Jacky Rosen — has been one the premier tossup campaigns all year.

Nevada is the fast-growing purple state in the country. And this is by far the closest Senate contest in the Pacific Time Zone.

So there's a real chance this could be the final contest called on election night, the one that decides which party will be the Senate majority next year.

Heller has been a senator since 2011 and an elected official in Nevada for 28 years.

Rosen won her first election just two years ago, coming to the House after a career as a software designer and president of the largest synagogue in the state.

Both candidates are portraying themselves as party loyalists who can also appeal to the center and are interested in bipartisan compromise. But behind those marketing strategies, the differences are pretty clear.

Heller never wavered, for example, about wanting to get Brett Kavanaugh on the Supreme Court. At one point he even dismissed the sexual assault claims against him as no more than a "hiccup."

And Rosen was never ambiguous about saying that Kavanaugh should be kept off the high court, because of his conservative judicial ruling and his alleged bad behavior.

Until the Kavanaugh confirmation fight, the main issue in the race was health care.

Rosen is ardently defending Obamacare — especially its expansion of Medicaid, the shared state and federal medical care program for the poor. That reduced the ranks of uninsured in Nevada more than in any other state.

Heller has been all over the place on the Affordable Care Act. At first, he opposed Trump’s repeal and replace plan. But after the president made a thinly veiled public threat to oppose the senator’s re-election, Heller voted for a slightly different GOP proposal to roll back large parts of the health-care law.

Rosen wants comprehensive immigration reform with a path to citizenship for many now in the country illegally.

Heller is trying to balance his past moderate record on immigration reform with his desire to stay on good terms with the president and his base of voters.

Rosen is in favor of more than doubling the federally guaranteed minimum wage to $15 in the next seven years. Heller has talked about doing away with the federal wage and leaving things entirely up to the states.

Rosen talks about boosting clean energy and combating climate change. Heller has generally sided with business and industry in the green debate.

There is one big local issue on which the two agree. They have both vowed to keep up the fight in Congress preventing the government from ever opening its dump for nuclear waste inside Nevada’s Yucca Mountain. It's a rare issue that has united Democratic and Republican congressional candidates across the state for more than two decades.