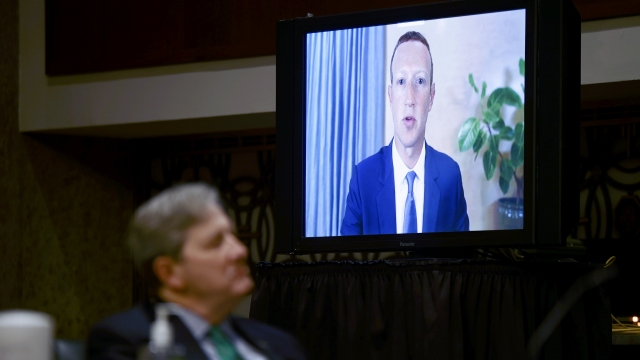 Most senators steered away from asking questions about the New York Post and instead wanted to hear about whether Facebook and Twitter thought their efforts to control election misinformation went far enough.

Sen. Dianne Feinstein pressed CEO Jack Dorsey about whether Twitter took sufficient action on a Nov. 7 tweet from President Trump in which he falsely claimed victory in the election.

“Do you believe this label does enough to prevent the tweet’s harms, when the tweet is still visible? It’s a highly emotional situation, but the tweet has no factual basis," asked Sen. Feinstein.

“But the tweet has a link to more information, to more conversation, and more context that informs the situation and what's happening," said Dorsey.

Republicans, like Sen. Ted Cruz, criticized the companies for using these labels, saying that they overstep usual moderation efforts.

CRUZ: "Why, then, is Twitter putting purported warnings on virtually any statement about voter fraud?"

DORSEY: "We’re simply linking to a broader conversation so that people have more information."

CRUZ: “No, you’re not. You put up a page that says voter fraud of any kind is exceedingly rare in the United States. That’s not linking to a broader conversation, that’s taking a disputed policy position."

Specifically, Blumenthal wanted to know why Facebook didn’t ban former Trump adviser Steve Bannon for using a Facebook live feed to urge that Dr. Anthony Fauci and FBI Director Christopher Wray should have their heads cut off for not being more favorable to President Trump.

BLUMENTHAL: “How many times is Steve Bannon allowed to call for the murder of government officials before Facebook suspends his account?

Facebook CEO Mark Zuckerberg: “The number of strikes varies depending on the type of offense. So if people are posting terrorist content or child exploitation content, then the first time that they do it, then we will take down their account."

ZUCKERBERG: "Senator, no, that’s not what our policies suggest -- would suggest that we should do, in this case."

Blumenthal concluded the session by saying that Zuckerberg and Dorsey “will be back in the next session of Congress” for additional hearings about issues with their platforms.