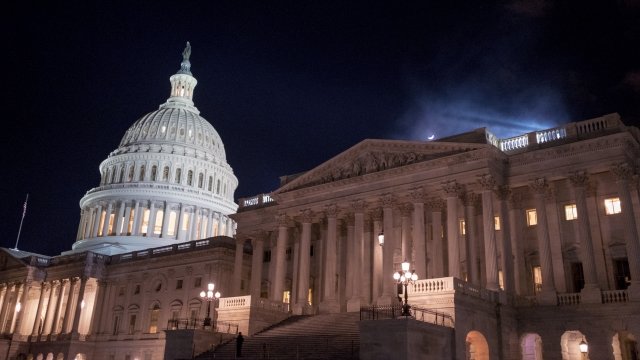 SMS
Senate Scheduled To Vote On Spending Bill Monday
By Katherine Biek
By Katherine Biek
January 22, 2018
The U.S. Senate is scheduled to vote on a short-term spending bill Monday. But the biggest hurdle still appears to be DACA.
SHOW TRANSCRIPT

The Senate is scheduled to vote on a short-term spending bill Monday.

That vote is taking place on day three of the partial government shut down that started Friday at midnight.

Lawmakers are currently at an impasse. Many Democrats — and a couple Republicans — voted against the first short-term spending fix because it didn't address the Deferred Action for Childhood Arrivals program, better known as DACA.

Republicans don't seem willing to include immigration changes in their spending bill quite yet. But on Sunday night, Senate Majority Leader Mitch McConnell promised to address DACA in February if there's no agreement on immigration before then.

The bill senators are voting on Monday would keep the government funded through Feb. 8. It also includes long-term funding for the Children's Health Insurance Program, or CHIP.

If the bill does pass in the Senate, it will also need to pass in the House before the government can officially reopen.