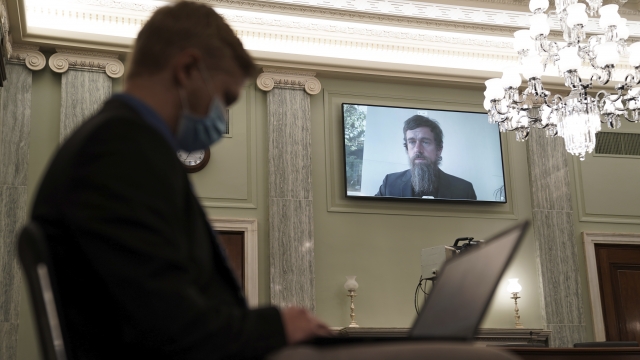 On Wednesday, the Senate Commerce Committee held a hearing with the CEOs of Facebook, Google and Twitter that was supposed to focus on a crucial internet law known as Section 230, which protects internet companies from being sued for moderating posts that may contain objectionable content.

But most of the participating senators strayed away from asking any direct questions about Section 230. Only two senators asked questions that focused on the law.

Democrats used the hearing to primarily call out these companies over how they’ve handled President Donald Trump’s posts with misleading information, or about antitrust issues.

In her written statement, Democratic Sen. Maria Cantwell of Washington state said she hoped to get a “report from the witnesses on exactly what they have been doing to clamp down on election interference.”

“Google has 90% of the public share ad server market product after it's Doubleclick acquisition. Does the market sound highly competitive to you, when you have 90% of it?" said Sen. Amy Klobuchar (D-Minn.)

"This is a market in which we share a majority of the revenue," said Alphabet CEO Sundar Pichai. "Our margins are low. We're happy to take feedback here. We are trying to support the publishing industry, but we're definitely open to feedback.”

Republicans went after the companies for allegedly censoring conservative speech.

"Mr. Dorsey, who the hell elected you and put you in charge of what the media are allowed to report and what the American people are allowed to hear, and why do you persist in behaving as a Democratic super PAC silencing views to the contrary of your political beliefs?" said Cruz.

Several Democrats complained about the possible politicization of the hearing.

“Let’s be clear, Republicans can and should join us in addressing the real problems posed by big tech," said Sen. Ed Markey (D-Mass.) "But instead my Republican colleagues are determined to feed a false narrative about anti-conservative bias meant to intimidate big tech so it’ll stand idly by and allow interference in our election again.”

"I have plenty of questions for the witnesses on Section 230, on antitrust, on privacy, on anti-Semitism, on their relationship with journalism," said Sen. Brian Schatz (D-Hawaii). "But we have to call this hearing what it is. It's a sham."

One Republican senator did note that there was no way to determine this conservative bias, however, in part because the platforms haven’t been open about giving out detailed information about how they moderate content.

“Due to exceptional secrecy with which platforms protect their algorithms and content moderation practices, it’s been impossible to prove one way or another whether political bias exists," said Sen. John Thune (R-S.D.). "So users are stuck with anecdotal information that frequently seems to confirm their worst fears.”