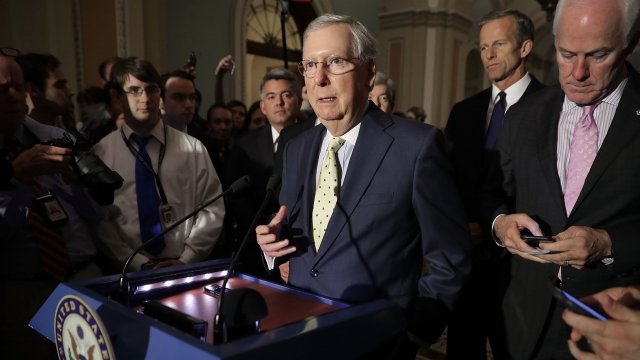 After working on the bill in secret, Senate Republicans published a draft version of their health care bill.

The Senate Republican health care bill is finally out in the open.

The Senate budget committee released a draft of the bill lawmakers have been working on behind closed doors. Let's break down some key parts of the bill and see how it differs from the House version of the American Health Care Act.

The Senate bill has a lot of similarities to the House version. Both eliminate the individual health care mandate, end the Medicaid expansion and allow states to fund Medicaid with a block grant.

The Senate version proposes a different way to help families pay for health insurance. It still changes the subsidy payments to tax credits, but it bases the amount of assistance on age and income, rather than just age.

Senate Majority Leader Mitch McConnell invoked a rule that will allow the Senate's version of the American Health Care Act to bypass committee.

The Senate bill does not change current coverage for pre-existing conditions. It also continues to allow children to stay on their parents health insurance until age 26.

The Senate can't vote on the bill until the Congressional Budget Office scores it. Senate Majority Leader Mitch McConnell hopes to vote before the July 4 recess begins.