The GOP Has Another Shot To Repeal Obamacare, And It's Coming Up Soon 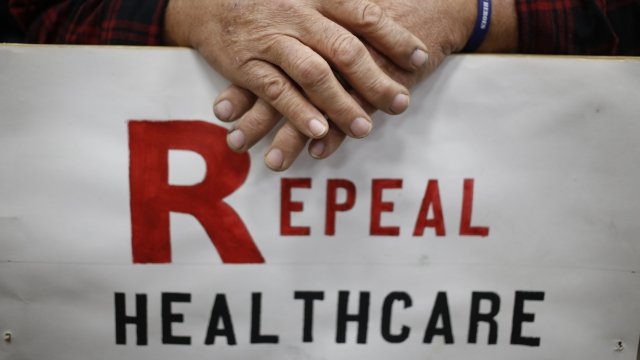 The deadline to pass the bill in the Senate with only GOP support is the end of this month.

As a crucial deadline approaches, Senate Republicans are pushing for another vote to repeal and replace the Affordable Care Act.

A bill introduced by Sens. Bill Cassidy and Lindsey Graham is gaining support, and Senate Majority Leader Mitch McConnell said he'll bring it to a vote if 50 senators back it.

And all this has to happen before Sept. 30, when the fiscal year and the GOP's chances of avoiding a filibuster both expire.

Remember, Republicans are using a special tactic called budget reconciliation in order to pass repeal legislation. A regular bill needs 60 votes in the Senate to avoid being blocked by a filibuster. Reconciliation lets certain fiscally-oriented bills dodge filibusters and pass with only 51 votes.

And if Senate Republicans can get 50 votes out of their 52 seats, Vice President Mike Pence would cast the tie-breaking vote and send the bill to the House without any bipartisan support.

Trump toned down his past anti-United Nations rhetoric but still pressed for the organization to reform itself.

In regards to the new Graham-Cassidy bill, McCain is now a maybe. Republican Sens. Susan Collins and Lisa Murkowski voted with McCain against the last "skinny repeal" effort.

Murkowski hasn't gone on the record about the new bill; Collins has. She said she was "leaning no," pointing out the Congressional Budget Office hasn't yet scored the bill.

She also said she had reservations about the bill's deep cuts to Medicaid, a concern she raised with previous repeal bills.

The decision wasn't so hard for Sen. Rand Paul, though. The ardent conservative tweeted this new repeal effort, like others, doesn't go far enough.

The biggest difference between this bill and previous ones is the idea of block grants.

Obamacare currently subsidizes insurance for lower-income households with federal money. The Graham-Cassidy bill replaces those subsidies by giving the states a set amount of money to spend on health care. It also ends the controversial individual mandate and rolls back a lot of Obamacare's Medicaid expansion.

If the Senate does cram in a vote this week, the bill would still have to make it through the House of Representatives unscathed. Top Republicans are assuring senators the bill would pass the House if it reached the lower chamber.