Senate Republicans Have Voted Against The PACT Act 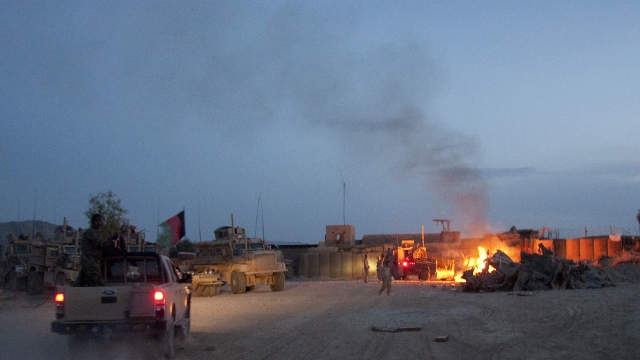 Americans are finding out what happens when Senate Republicans feel double-crossed on a budget bill.

25 Senate Republicans are flipping to "no" votes on the PACT Act, a bill that would expand health care for roughly 3.5 million veterans exposed to toxic burn pits in Iraq and Afghanistan.

"I see it as strictly repulsive, partisan politics that is hurting the men and women who put their lives on the line to defend our freedom. And just, totally, it's disgusting," Torres said.

Those pits burned everything from medical waste to body parts. Veterans exposed to the toxins have experienced a host of illnesses, including neurological disorders and cancer.

The change of heart from Republicans came in the wake of a surprise budget deal by Senate Democrats, which included climate and health care funding paid for with tax reform. Some Republicans are taking it as a betrayal by Democratic Senator Joe Manchin, who previously said he wouldn't support the legislation.

Former VA Secretary Dr. David Shulkin spoke about his disappointment in a new interview with "The Why" host Lauren Magarino.

"What impact will this have on veterans in need? Well veterans are going to continue to have to wait and that means they're going to suffer. They're not going to get access to the type of services they need. And unfortunately it means many of those veterans will not be able to last longer and some of them will die. I've seen lots of things in Washington — this one is one of the more concerning and upsetting things that I've seen," Shulkin said.

Some Democrats, like Senator Patty Murray, are now accusing Republicans of using veterans as a "bargaining chip" but Senate Republicans say the real issue is Senate Democrats' priorities.

That sentiment was made clear in a statement to Newsy by a spokesperson for Senator Steve Daines, who asked: "Do the Democrats want to invest in veterans' healthcare, or spend hundreds of billions of dollars on their Green New Deal and raise taxes on Americans? They can't have it all."

Republicans insist the PACT act is far from dead.

"This bill will ultimately pass, but it will be more fiscally responsible," said Senator John Cornyn.

But Senate Republicans are poised to take their anger out on another bill. Senator Susan Collins says her party is so angry, senators may block the effort to codify same-sex marriage, which could come up for a vote as early as next week.

In an interview with the Huffington Post, Collins said: "I just think the timing could not have been worse and it came totally out of the blue."

Senator Collins had previously suggested she'd support the Respect for Marriage Act, one of a few Senate Republicans to do so.

Democrats say Republicans are hurting themselves, and vulnerable Americans in need.

"Wait a minute. You're not gonna help our veterans, because we want to: lower the cost of prescription drugs, the cost of health care, to protect the planet. Of course, you don't agree with any of those things, but would you use that to vote against our veterans? It's it's really immoral, almost criminal," said House Speaker Nancy Pelosi.