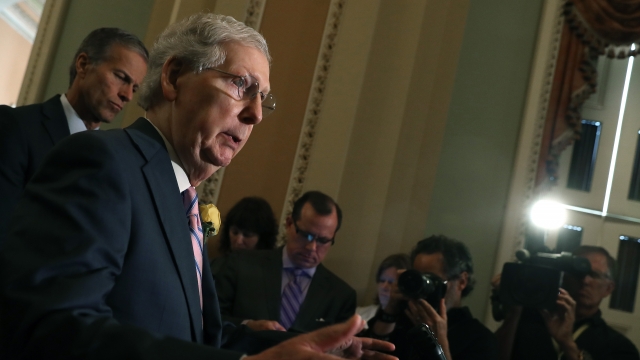 Last week, President Trump said he'll impose a 5% tariff on all Mexican imports beginning on June 10 unless Mexico does more to reduce the number of immigrants coming into the U.S. illegally. Those tariffs would then increase by 5% each month after, and could ultimately reach as high as 25% by October.

During a news conference in London on Tuesday, President Trump said despite a meeting between U.S. and Mexican officials on Wednesday, he "think(s) it's more likely that the tariffs [will] go on" as planned. When asked about some Republicans' statements that they may take action to block the tariffs, the president said he doesn't "think they will do that," adding that it'd be "foolish" if they did.

But shortly after those comments, many Republican senators expressed their objection to the plan. Senate Majority Leader Mitch McConnell said there's a clear lack of support for tariffs in the Republican conference, and that they hope "that the tariffs will be avoided." Sen. Ted Cruz said although securing the border is important to him, he feels it's unfair that Texas farmers and manufacturers would have "to pay the price of massive new taxes." Sen. John Cornyn likened the move to "holding a gun to our own heads." And Sen. Ron Johnson said the president "should be concerned" about the prospect of the Senate holding a vote to stop the tariffs.

But other Republican senators are more open to the idea. In an interview with Newsy on Tuesday, Sen. Marco Rubio said although he's "not generally a tariff fan, as a matter of policy," he doesn't "know how else to get Mexico's attention" on the matter of immigration.

"We provide them intelligence about these smuggling networks that they can take action against, and frankly they just haven't done it," Rubio said. "And so everything else has been tried, every carrot possible has been offered, and they are still not responding."

Mexican President Andrés Manuel López Obrador said over the weekend he believed the two countries "will be able to reach an agreement." But during negotiations on Wednesday, U.S. and Mexican officials failed to reach a deal to stop the tariffs from going into effect. President Trump said the two countries will continue talks on Thursday.