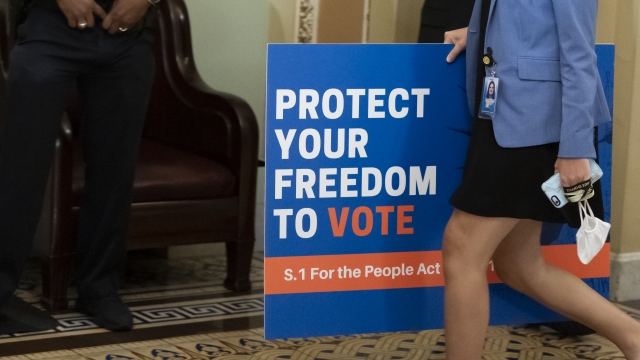 Majority Leader Chuck Schumer said: "In the fight for voting rights, this vote was the starting gun. Not the finish line."

The bill, known as the For the People Act, would have been the largest overhaul of the electoral system in a generation. It would impact nearly  every aspect of how elections are conducted, striking down hurdles to voting, while curbing the influence of money in politics and limiting partisan influence over the drawing of Congressional districts.

But many Republicans say the measure represents a federal infringement on states' authority to conduct their own elections without fraud.

After the vote, Vice President Kamala Harris said the White House will continue its efforts to expand voting access.

She said: "The issue here is: is there actual access to the voting process or is that being impeded? The bottom line is that the president and I are very clear: We support S1, we support the John Lewis Voting Rights Act and the fight is not over."