The GOP-Led Senate Hearing on Weed Banking Is Huge. Here's Why. 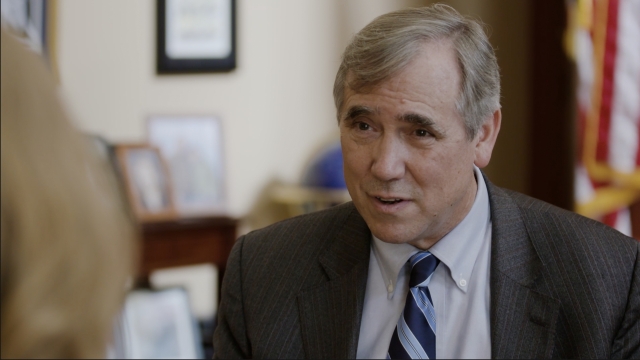 SMS
The GOP-Led Senate Hearing on Weed Banking Is Huge. Here's Why.
By Kellan Howell
By Kellan Howell
July 22, 2019
A GOP-led Senate committee is set to host an historic hearing on standalone marijuana legislation to allow state-legal weed businesses to use banks.
SHOW TRANSCRIPT

A Senate panel is hosting a first-of-its-kind hearing on a bill that would allow state-legal cannabis businesses to access banks.

"I think what we're seeing is that, we have states that are proceeding to be added to the column of having either medicinal recreational marijuana. And that includes states represented by Republicans," said Oregon Democratic Sen. Jeff Merkley.

Because marijuana is still federally illegal, state-legal cannabis businesses are not able to open bank accounts, use credit cards, or get loans.

That means most marijuana businesses operate on a cash-only basis, and Merkley -- who will testify at the hearing -- says that's left business owners vulnerable to robbery and assault. It's also created a window for criminals to run money laundering and tax evasion schemes.

"It's totally counterproductive to operate in cash," said Merkley. "And finally, we're getting a Senate hearing, a with a bipartisan bill. And I think we have some momentum. I'm pretty optimistic".

The bill -- known as the SAFE banking act -- would allow financial institutions to work with cannabis businesses without the fear of any punishment from the federal government. Merkley is co-sponsoring the legislation in the Senate.

Now, advocates are lauding the hearing as a significant step toward major cannabis reform.

Justin Strekal, political director f or the National Organization for the Reform of Marijuana Laws, praised the hearing in a statement saying, "For the first time in history, a Senate Committee will be having a candid conversation about the implications of federal criminalization and undue burden it places on state-legal businesses."

Thirty-eight state Attorneys general sent a letter to Congress in May urging members to pass the SAFE banking act. State bankers associations from all 50 states and Puerto Rico sent a letter to the Senate banking committee that same month asking leaders to hold a hearing on the bill.

It is expected to easily pass in the Democratically controlled House, and if it makes it through the Senate Banking committee, it would be eligible for a vote in the full Senate, but only IF Senate Majority Leader Mitch McConnell agrees to bring it to the floor.

While McConnell championed a provision to legalize hemp in the 2018 Farm bill, he’s been staunchly anti-pot. But Merkley says he thinks McConnell could change his tune on the SAFE banking act.

Merkley admits that while McConnell hasn't been an advocate for pot legislation, "he has been an advocate for hemp for legislation. And this bill also provides protection of in that regard. So it can be of assistance to Kentucky and to other states that have a strong hemp industry. And quite frankly, even if you're not from a state that has medicinal or recreational marijuana, you can understand that nothing is served by facilitating money laundering in the United States of America assisting criminal syndicates to do their evil work. So this is something that should concern everybody in every state."