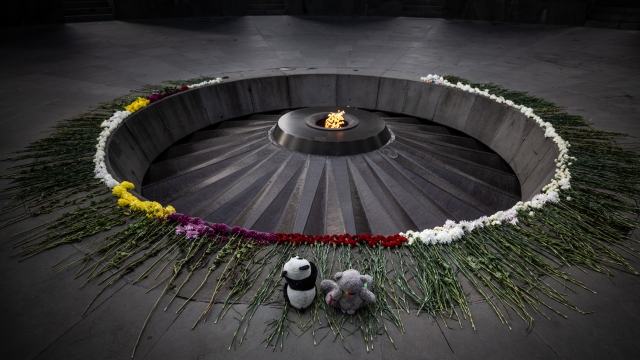 SMS
Senate Passes Resolution To Officially Recognize The Armenian Genocide
By Antoinette Miller
By Antoinette Miller
December 13, 2019
In October, the House voted 405-11 in favor of recognizing the Ottoman Turk-led genocide that killed 1.5 million Armenians in the 20th century.
SHOW TRANSCRIPT

The Senate has officially passed a resolution that recognizes the century-old Armenian genocide, despite previous opposition from President Trump.

Back in October, the House voted 405-11 in favor of recognizing the Ottoman Turkish-led genocide that killed 1.5 million Armenians in the early 20th century. But following pushback from the White House and multiple failed attempts to get the resolution on the Senate floor, the measure passed Thursday.

New Jersey Sen. Robert Menendez became emotional as he described details of the genocide, including how people were murdered with axes and infants were killed in front of their mothers.

The modern Turkish government has vehemently denied that the events were a genocide. It acknowledges that atrocities took place but insists there was no systematic campaign to exterminate the Armenian people.

President Trump has spoken highly of his relationship with Turkish President Recep Tayyip Erdoğan, and many lawmakers previously objected to the vote in order to protect the two countries' already complicated relationship.

After the vote, the Turkish Foreign Affairs Ministry said in a statement that the resolution lacks "historical awareness" and is neither "legally binding nor valid."

It continued: "This resolution of the Senate is one of the disgraceful examples of politicisation of history. However, those who exploit history by disregarding reality for their political interests will never achieve their aims."