A Controversial Surveillance Bill Is Headed To President Trump 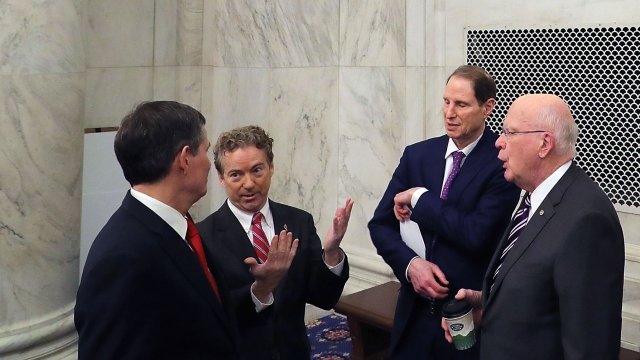 SMS
A Controversial Surveillance Bill Is Headed To President Trump
By Casey Mendoza
By Casey Mendoza
January 18, 2018
The bill would reauthorize the program previously used to obtain Americans' transnational communications without a warrant.
SHOW TRANSCRIPT

A controversial surveillance bill is headed to President Donald Trump.

Following threats of a filibuster, senators approved on Thursday the six-year expansion of Section 702 of the Foreign Intelligence Surveillance Act. That's the program that allows the U.S. government to "obtain the communications of foreigners ... including foreign terrorist threats."

Many Republicans like Senate Majority Leader Mitch McConnell argue the program combats terrorism and keeps Americans safe. Trump supports and is expected to sign the bill, but not everyone is in agreement on the program's merits.

Some Republicans, most notably from the House Freedom Caucus, and many Democrats argue the bill threatens the privacy of Americans.

That's because Section 702 has been used by federal agencies to obtain Americans' transnational communications without a warrant. Whistleblower Edward Snowden leaked this information in 2013.

Despite the reauthorization of the program, some lawmakers have also introduced rival bills that would preserve the government's ability to obtain foreign communications but also protect the Fourth Amendment rights of Americans from unreasonable search and seizure.