Senate Passes $1.7B In Aid For States Hit By Hurricane Florence 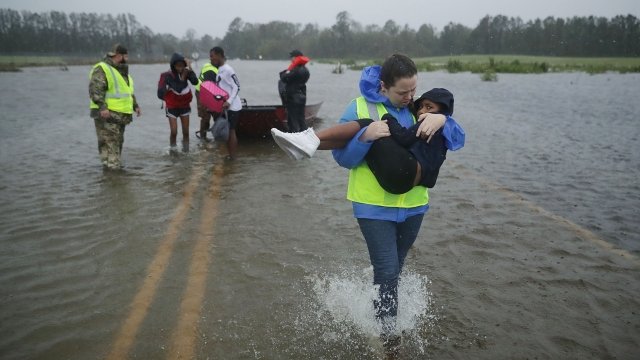 SMS
Senate Passes $1.7B In Aid For States Hit By Hurricane Florence

By Caitlin Baldwin
October 4, 2018
The aid is included in a bill that would keep the Federal Aviation Administration funded for another five years.
SHOW TRANSCRIPT

A bill including $1.7 billion in disaster aid for states pummeled by Hurricane Florence is now on the way to President Trump's desk.

The disaster aid was tacked on to a bill that will keep the Federal Aviation Administration running for another five years, to the tune of $90 billion. The senate overwhelmingly passed the bill Wednesday.

It also includes regulations on airline seat sizes, the development of a "Bill of Rights" for passengers with disabilities and gives the Departments of Justice and Homeland Security the authority to track drones deemed a "credible threat," to the American people.

The legislation also addresses how airlines can act when it comes to overbooked flights. The bill says airlines can't force passengers off, and must compensate passengers who are kicked off an overbooked plane immediately. Before that, customers had to file a claim themselves. That's partly in response to a video that went viral last year of a man being forcibly dragged off a plane.

President Trump is expected to sign the bill into law.