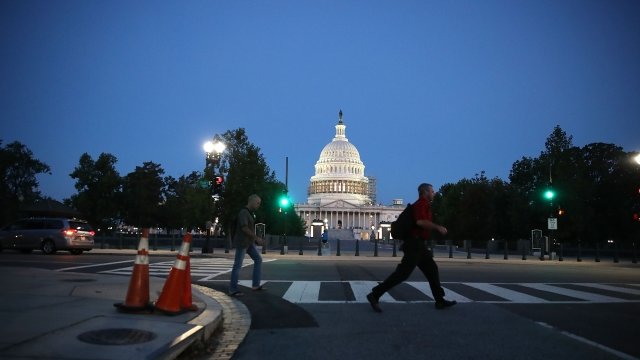 SMS
Senate Passes $1.3 Trillion Spending Bill In Late-Night Vote
By James Packard
By James Packard
March 22, 2018
Congress had to pass the bill before midnight Friday or the federal government would have run out of money.
SHOW TRANSCRIPT

The Senate just passed a major $1.3 trillion budget deal to fund the government through September and avoid another government shutdown.

Congress had to pass something before midnight Friday or the federal government would have run out of money. Now, the funding bill heads to President Donald Trump for his signature.

The day leading up to the vote was contentious. Republican Sen. Rand Paul reverted to an old tactic, joining at least one other senator in needing convincing from Senate leaders before agreeing to a vote. Paul wanted to read through the bill first. Eventually, he allowed the vote to move forward but voted against it. He joined 31 other senators in a "no" vote.

The bill would increase spending on the military and programs here in the U.S. It's the result of months of back-and-forth between the parties over how the government should spend its money. We don't have to tell you that was a rocky few months, with multiple shutdowns and multiple temporary spending packages. The White House said Thursday the president would sign the bill.