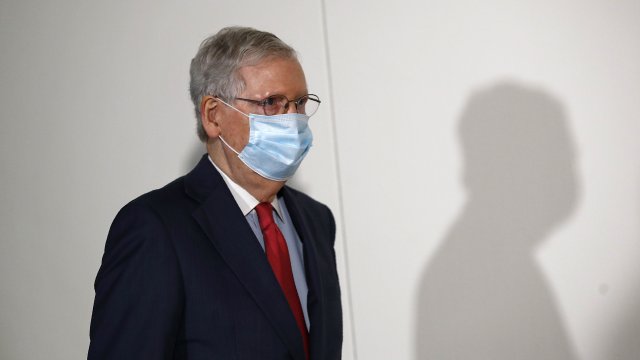 The halls of Capitol Hill are empty. The Senate is home for a Memorial Day work period. The House is working remotely amid the pandemic. The recently passed House COVID relief bill, the HEROES Act, is sitting on Senate Majority Leader Mitch McConnell's desk. For nearly a week, he has shown virtually no interest in it. Now, in an interview with Fox News, he's reversed course.

Democrats and some Republicans alike are outraged the upper chamber went home. Republican Sen. Cory Gardner said in a tweet, "It's unfathomable that the Senate is set to go on recess without considering any additional COVID19 assistance for the American people." Gardner, who called for the Senate to remain in session over the holiday weekend, is currently fighting for reelection. A recent Denver Post poll puts him behind a Democrat, former Colorado governor John Hickenlooper.

Sen. Susan Collins, another at-risk Republican, is trying a different tactic, introducing bipartisan legislation on a smaller package to send $500 billion in federal relief to state, local and tribal governments.

Sen. Roy Blunt told CNN he was optimistic a package would be done before August recess.

"That's way too long to wait," said Democratic Sen. Sherrod Brown. "There's lots of things we need to do to help businesses stay in business. Help businesses sort of re-up their their operations. And we should just be sitting in Washington ... confirming more judges for Mitch McConnell."

Democrats were hoping to take up the HEROES Act immediately, even knowing it is nearly impossible to pass it in its current form.

The Senate isn't scheduled to meet again until June 1.