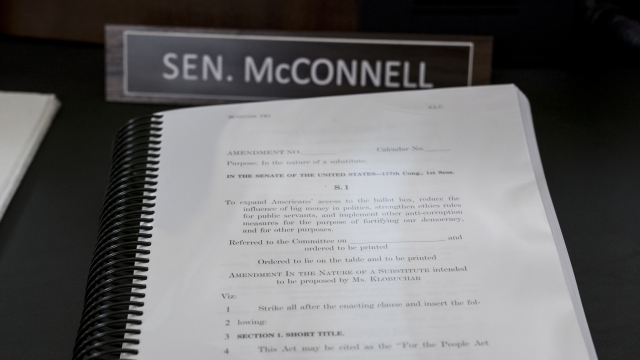 SMS
Senate Leaders Debate Election Bill
By Simon Kaufman
By Simon Kaufman
May 12, 2021
The Senate Rules Committee voted along party lines to advance the "For the People Act."
SHOW TRANSCRIPT

A wide-ranging elections bill is one step closer to becoming law.

The Senate Rules Committee voted along party lines to advance the "For the People Act."

In a rare move, the Senate's leaders spoke during the meeting Tuesday.

"The Democratic party on its own wants to rewrite the ground rules of American politics for their benefit," said GOP Senate Leader Mitch McConnell. "This is a partisan effort to take over how you do, how you conduct elections in our country."

"In states across the country, Republican legislatures have seized on the big lie to restrict the franchise and inevitably make it harder for African Americans, Latinos, students and the working poor to vote," Democratic Leader Chuck Schumer said. "S1 one would nullify many of these voter suppression laws and protect the rights of American voters."

as far as the future of this bill, we'll have to see.

It passed the House with no bipartisan support. And it's unclear if it will even gain the support of all Democratic senators.