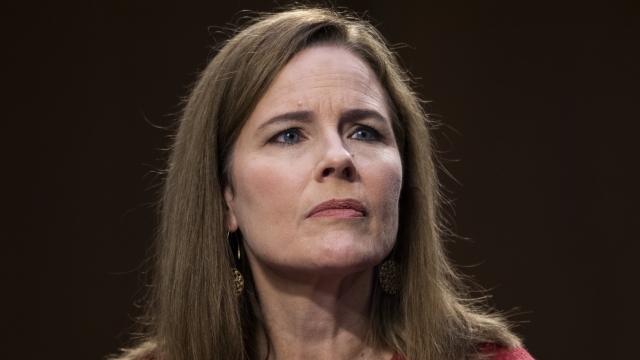 "The nomination will be reported favorably to the floor with a unanimous vote," Senate Judiciary Committee Chairman Lindsey Graham said.

The move will likely send President Trump into election night with his third Supreme Court nominee confirmed to the bench.

President Trump tweeted about the news… calling it a "Big day for America!" Democrats were a no show.

"We are boycotting this illegitimate hearing," Sen. Chuck Schumer said during a press conference.

In their seats were photos of people they say have been helped by the Affordable Care Act, which Democrats fear Barrett will overturn.

Just one week after the election, the Supreme Court will hear a case from the Trump administration arguing that Obamacare is unconstitutional.

President Trump said he thinks the court will overturn the law in an interview with 60 minutes.

"We'll see what happens," President Trump said. "I think it'll end. I hope that they end it. It'll be so good if they end it."

Barrett's confirmation would solidify a 6-3 conservative majority on the Supreme Court.

Former Vice President Joe Biden says if he is elected president, he will form a bipartisan commission to make recommendations on how to reform the court system.

"And I will ask them to over 180 days come back to me with recommendations as to how to reform the court system because it's getting out of whack, the way in which it's being handled," Biden said.